Xmas Done Next Up NYE

Hope you got or bought yourself something you wanted.   Like Sock Monkey jammie’s and slippers. 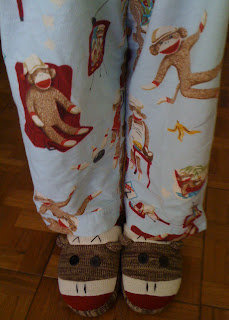 So now that Christmas is behind us and we are approaching the impending amateur hour that is New Years Eve it is time to reflect on something that is truly special…. The First Tracks MTB ride.

Sunday, (Boxing Day to you on the other side of the pond) we officially got our first snow.  T-Rav and I decided to take full advantage of it.  Bakey came along for the ride but she wont ride with us.  We were all on the same trails just not technically “together”.

We timed it perfectly. Just after we finished dressing up like this…

It started to flurry and we started our ride.  The trail was perfectly frozen for traction and the flurries started to turn to snow.  We saw just a few cyclists and even more people out for a nice snow stroll.  Seeing only a few people out riding did allow for “First Track’s” 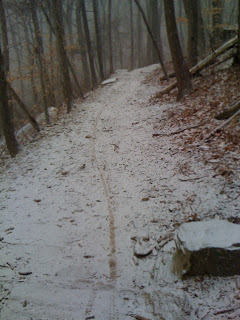 Most of the people out enjoying a snow stroll were strolling with man’s best friend.  Furthermore most of these people were enjoying there time with Fido (I’m guessing all the dog’s weren’t named Fido this is more a collective Fido for storytelling purposes) off the leash.  I like dog’s, and don’t particularly care that people walk there dog’s off the leash.

T-Rav and I tend to be nicer to the dog’s than people.  When we encounter one he or she always gets “Hey Buddy” or “Hi Puppy”. So imagine my surprise when I said “Hey Buddy” to a cute little brown dog in the trail and he said hi back by sinking his teeth into my calf.  Yes the little guy bit me.  Not a full on bite but a nip from the front of his mouth.

Cujo (I’m guessing his name wasn’t actually Cujo) was still in full on bark-a-thon at me and thinking about having me for a main course when T-Rav caught his attention by waving a stick at him.  Thank god for limited attention capacities.  (The dog’s not mine).

Rather aggressively I told the guy walking Cujo to come get him NOW!   I informed said dog walker that I have no problem with dog’s off the leash but if his dog tended to bite people he probably should keep him on the leash.  I was rather Ticked Off.  This was the only negative spot in an other wise ideal ride.

The bruise that is forming under the bite is proving to be a very festive green.  Luckily the teeth didn’t tear through my tights.  Then I really woulda been ticked.

The last thing I have to say on this subject is that Mad Alchemy Coffee Embrocation in an open dog bite wound is not comfortable at all.  Hopefully you take my word for this and dont feel the need to prove this yourself.

The more we rode, the more the trail covered with snow.   Go figure.  We were about finished and stopped to take some pictorial evidence when I realized that my camera was still in the Spruck.  Luckily T-Rav had his phone.  Oddly I was perfectly comfortable reaching into his middle pocket and pulling it out.

The snow was coming down fast enough to almost cover our tracks by the time I was reaching back into his middle pocket to put the camera back.  Ok that was a little odd but I got over it.

Here are the Pic’s to prove we actually rode….

We spent the next few hours rehydrating and getting our eat on at Iron Hill.

Then I got snowed in for the night.

All In all I would say it was a day well spent.

While playing in the snow on the Right Coast The Green Laker was basking in a reprieve from the rain on the Left Coast and taking a spin. 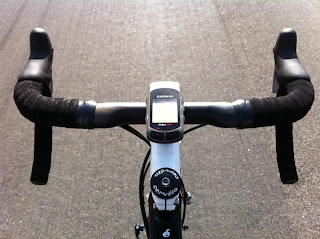 Different way’s of doing of getting your ride on but all fun.

Come on back for a Wednesday Quote and some kinda year-end wrap up thing.