Why do I Ride? 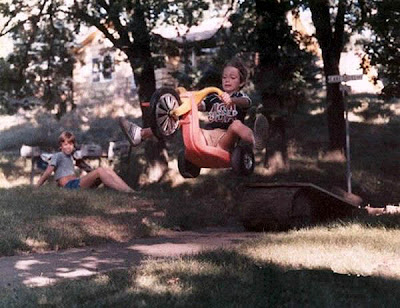 This pic from the Green Laker got me thinking. I started riding at a young age and went through three bigwheel’s before my first real bike. I rode them until the front wheels literally split into two pieces because the plastic in the center wore out. Wish I would have done a no footer like that kid though. He is definitely rad.

My first bike was slowly transformed from a banana seat bike to a BMX bike. The seat got replaced with a ten speed seat, the chainguard came off, as well as the fenders, and I saved up and got an Ashtabula fork. It was probably in an attempt to be more like 4. He was and is to this day my childhood hero.

We came up with the idea to tow my mom’s old baby carriage down the street. The only effective way to do this was to turn it backwards and flip the bag between the handles over onto the seat and sit on it. The problem was the rear wheel of the bike would rub the axle of the carriage and flip it. At this point I cant remember if we thought weight would stop it from flipping, or if I just wanted the thrill, but I was littlest and got in. 4 pedaled like hell and got ripping down the street. It was fun until…

Of course the carriage flipped even with me in it. 4 dragged me for a good while and probably only realized that I was down when he heard me shrieking like the fire whistle. Anyone who knows me knows that out of this little body comes some massive volume. It couldn’t have been pleasant to hear. The kid’s huddled me over to 4’s house and aunt Ginny did her best to clean me up. This was my first experience with road rash. I ended up going to the hospital to get de-pebbled, and had to wear a mesh shirt for a while to hold the bandages in place. I was riding again the next day, mom was less than enthused.

My mom came up with an old parachute and gave it to us to play with. We would take turns folding it up, and tying it to our bikes. We would go to the end of the street and sprint as fast as possible before throwing the parachute in the air. Sometimes it would balloon up picture perfect, just like in the movies and everyone would cheer. Other times it would just kinda sputter out, and then the collective groan was audible. It took forever to fold that parachute back up but we would do it with excitement for our next run.

All that from one picture of a kid on a bigwheel. I actually enjoyed that trip down memory lane. There are plenty more trapped in my head. I do believe I’ll let a few more out.