Wednesday Quote Why so Blue?

“A novel is a mirror which passes over a highway. Sometimes it reflects to your eyes the blue of the skies, at others the churned-up mud of the road.”  Stendhal

There has been a ton of chatter on the cycling sites about all of the new team kits being announced.  My first thought on most of them is “Why so much Blue?”  And Baby blue at that.  I might venture to say it may even be Tiffany Blue. 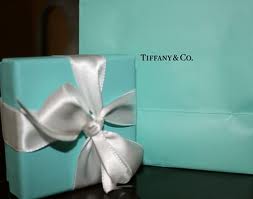 Are the teams reaching out to the fairer sex? We know that many girls like to see what’s inside the baby blue package–insert your own innuendo’s.

As far as I understand the concept behind team sponsorship is about branding.  The goal is to get recognition for a product or service via cycling.  For the most part team sponsorship is not so much about the love of cycling as it is an advertising expense.  There are exceptions such as the altruistic vision of the the Leopard portion of the Leopard-Trek sponsorship.  But these are rare and still convoluted.  Why Astana sponsors a team is a bit of a mystery but it certainly generates interest and awareness of the region. That’s probably the answer.

For those of us in the states who follow cycling we are in the minority.  We know the teams and players but the person standing next to you in the grocery store is more likely to know who Donovan McNabb is than Tom Boonen.  In Europe it is a different scenario all together, cycling is in the sports pages everyday.  Winners of prestigious races grace the covers of magazines and newspapers, and they make the nightly news highlights.  Ask most Americans who Jan Ullrich is and you will get a blank stare.
I have often said to anyone who will listen (or the wall if I’m talking to myself) that professional cycling is an inexpensive advertising vehicle.  Of course that is all relative.  If you were a major corporation and stepped in with $10 Million you could get naming rights to a team and exposure for a year.  Or you could buy a one minute Super Bowl commercial that costs several million dollars to make.

The point of this rambling diatribe is to get this bang for your buck, you should be distinctive.  Team Sky, Garmin-Cervelo, and Team Leopard-Trek are all similar.  Astana has a similar shade and Saxo Bank Sungard is running a blue theme even.  How are these teams going to be distinctive in a mass of 200 riders rolling down the road en masse?  I can here Phil and Paul confusing them right now.

Lets take a look, first up Team Sky.  They were the first to use the black and blue combo.  Is imitation the sincerest form of flattery?  If so Team Sky should be flattered.

Next up Garmin-Cervelo, gone is the majority of the argyle.  It appears in the blue. Possibly they chose the blue because of corporate branding. But the blue in the jersey isn’t the same shade of blue in the Garmin logo.

When I heard the Luxembourg super team was going to be called Leopard, my first thought was that we would be treated to a Cipolliniesque Lion King-like Kit.  Something flashy and animal print.

I was practically giddy with excitement and then the BIG REVEAL….

I was underwhelmed.  On its own I like the jersey, the shorts aren’t bad either.  A nice clean kit.  But Distinctive? No. Original? No.  Not being tied to a corporate color scheme they could have done something much more inspired.

So far it appears that the Team Astana kits are relatively unchanged.  Lots of baby blue but extremely distinctive.  Baby blue shorts can have a downside much as white or even green. (See comments below)  That is four baby blue teams.  Anyone care to break out singing “Breakfast at Tiffany’s”? 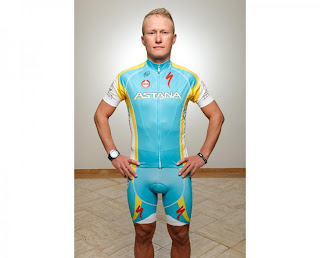 And….. WHAT is with the Eagle?  I know it is Bjarne’s symbol but what’s with the placement.  I can only imagine how the shorts are going to tie into the jersey.  It is not good and there is something wrong with my sense of humor.

Even Liquigas has cut down their distinctive green and added way more white.  This green has been great branding and is easy to spot in the peloton.  If you surf over to the Liquigas corporate site you will see that this color is directly tied to the company.  I am not prone to walking around in the color everyday but they were easy to spot.

Heck I’ve shared an elevator with the team and well let’s just say I know more about those Italian men then I ever wanted to.  The woman I was with was speechless for a few afterwards as well.  When she did finally speak the words that came out were not suitable for print in this forum.  All that aside, it was an effective use of color as branding and toning it down seems a tad odd to me.

Team Katusha chose to get away from the blue and went red for the year.  There is still a ton of white but they should stand out a bit more in a sea of blue.

And then there is Team Radio Shack or as they would like you to call them The Shack. Red as the predominant is gone and its onto alot of white.  Thank goodness the shorts appear to be black but the road spray is gonna make the jersey look grungy.  Maybe the thought behind using white is that in the victory salute the person appears “EPIC” in all of their dirt and sweat and glory.  I personally would have preferred more red less white.

Anybody want to cough up a couple of million to sponsor a Pro-Team? I’m game to help, but I only have some pocket lint and an old Altoids tin full of change to contribute, but I’m FULL of ideas.

Enough about kits.  Let’s get onto racing already. The Tour Down Under starts in Six days, and Cyclocross worlds are in 18 days.

This post was very skinny tire oriented.  Let’s end on a fat tire note.  Jake has been expanding his repertoire from still to moving photography.  Here is how my old friends in Blue (get the tie in?) chose to reveal the new Mountain Bike team for 2011.  A dapper Duncan Riffle introduces the team.

The lords of the interwebs don’t want me to embed this video at the moment.  So until I get the fancy thinking box known as a computater doing what I want instead of what it wants just click this LINK to see the YouTube video.

That is more than enough for a Wednesday.  As the young un’s used to say and no longer do… Peace Out.