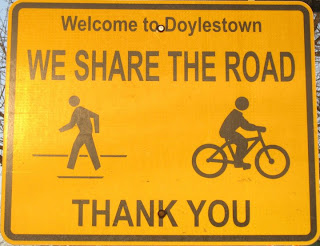 “Toleration is the greatest gift of the mind; it requires the same effort of the brain that it takes to balance oneself on a bicycle.”    Helen Keller

When we are small children one of the thing that parents teach us early on is sharing.  It is a tough concept for children to grasp but most children seem to get it rather readily.   It seems many people forget this valuable lesson as they get older.  In particular I am speaking about drivers attitudes to bicyclists.
I understand that there are certain cyclists are crappy and ignorant.  These can give cyclists a bad name.  Just as crappy drivers exist and can give drivers a bad name.  These outliers are not who I am speaking of.
I have had several run-in’s with drivers this year that seemed to be driving well and not dangerously.  They took it upon themselves to “educate” me that I was breaking the law by riding as I was or riding two abreast.  In two instances I got pretty agitated.  Afterward I got pretty down on myself for yelling at drivers.  I used to be a hot head on the bike but thought I had grown out of it.
In retrospect one time I believe I felt threatened and was definitely irritated that the beautiful young lady I was riding with were not all together safe.  This was two instances within five minutes of each other.  The first was getting yelled at by a motorcyclist who frankly should know better.  The second person who was “educating” us took the brunt of my anger and frustration.
The other time riding with T-Rav we were told that if we were riding two abreast (on a wide secluded back road) that he would probably hit us.  He said he was just “looking out” for us.  If he would hit cyclist’s riding two abreast how the hell is he going to pass another vehicle safely?  Again I hollered at the driver.  T-Rav looked at me like I was crazier than usual.
Both times I ended yelling at people with “Read your Drivers Manual”  I was 99% sure I was correct but I doubted myself a bit and went and looked up the PA and NJ manuals.  I am happy to report that I was correct.
In New Jersey you can see the rules of the road pertaining to bicycles HERE.
A few highlights from this document are.
First of all “In New Jersey, the law states a bicyclist must obey all state and local automobile driving laws”
The one that I was concerned with “To travel no more than two abreast when traffic is not impeded, but otherwise ride in single file”
In Pennsylvania you can see the rules of the road pertaining to bicycles HERE.
PA states “Bicycles are considered vehicles under Pennsylvania Laws and must obey all the rules of the road which apply to vehicles”
PA also states “Persons riding pedalcycles upon a roadway shall not ride more than two abreast”
I was glad to know I was correct, but this knowledge is not going to change other peoples minds about where we as cyclists should be.  Also hollering at a driver is potentially dangerous.  I learned this the hard way as a hot headed youth when I gave a driver the one finger salute for cutting me off.  He chose to answer my one finger salute with a pipe to the rear wheel.  Completely destroying it.  Luckily it wasn’t aimed at me.
Be safe out there hold your ground know your rights and keep the rubber side down.
Maybe cyclists and drivers alike should abide by Helen Keller’s quote and have some tolerance of each other