“Nothing in the world can take the place of persistence. Talent will not; nothing is more common than unsuccessful men with talent. Genius will not; unrewarded genius is almost a proverb. Education will not; the world is full of educated derelicts. Persistence and determination alone are omnipotent.”   Calvin Coolidge

Have you been interested in bicycles for awhile?  Were you one of those young kids who grew up loving BMX?  I sure was.

A friend of mine Russ Okawa died yesterday.  Do a quick google search on Russ and he starts showing up on the radar in the early 70’s managing BMX teams.  I didn’t know Russ as well as many but I certainly would enjoy sitting down at the end of a hard work day (And Russ would work tirelessly all day long) and enjoy a nice bourbon or occasional scotch with him.  There are many people who have the years in that Russ did and wont get their hands dirty like him.

I can not do justice to his legacy.  When I see a fitting legacy to Russ I will post it here.  Russ sponsored and helped discover some of the mainstream BMX and Mountain Bike stars we know and love today.  I want to say that he had a hand in getting John Tomac early on.  I could be wrong please correct me if you know.

Last night’s Maker’s Mark was for you Russ.

Now on to another bicycle industry guy who is following his own way.  Check out what Stevil is up to over at AHTBM.

This homage to Burt Reynolds and Smokey and the Bandit has Bike Rumor proclaiming that this could be the Raddest Wool Cycling Jacket Ever.  They could be correct.  Now I need to figure out which one of my kidney’s is worth $160.  If you have $160 in your sofa cushions and a desire to be touched by Stevil’s vision order up your own.

You may be aware that this is a new year.  Saturday was the first day of 2011.  If you are unaware of this then you my friend are oblivious, know how to party or a combo of both.

Saturday started off with the re institution of the New Years Day Century.  It has been a few years since the century took place.  20 plus people showed up.  It was a good crew.  We rolled out together and at around the 18 mile mark the weirdest thing happened.

We had just crossed the bridge into New Jersey. 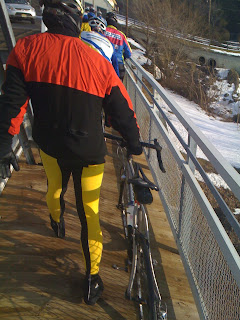 We were rolling on a straight street and just crested a small hill.  John (The Legend) Chaki said that he was gonna take a left.  He took the left and so did EVERYONE else.  Well everyone else but 3 of us.  It was honestly something out of a movie.  I am going to title it ” And Then There Were Three”  It will star Steve (The Product Manager) Fairchild, Jen (The legend’s Daughter) Chaki and Me. 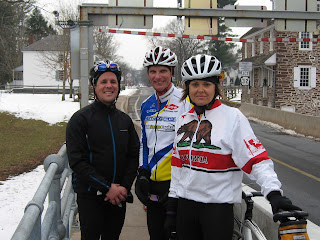 It was a good cast for a Winter century. Steve has power enough for all three of us, Jen is tougher then all three of us and I am stubborn enough for everyone reading this.  The three of us worked well together and had a fun time.  In the end we logged 101.7 miles and finished in about 6 hours.  Not bad for a winter 100 in my book.

The Pulled pork simmered all day and was waiting when I got home. Not bad at all for a first attempt.

That is all for today.  Have a good one and support your Local Bicycle Shop.  They really are a good group of Guy’s and Girl’s