I was riding my bicycle home sunday night.  It was nice, a rain shower had just passed and I had spent several hours with with my daughters and several thousand other children.  The venue was a few miles away so I rode my bicycle home.  My mom and dad went with me and I stuffed the bike in the back of their mini van.  They left before me and I was able to stay on my new kick of riding when possible.
Leaving the school there is a nice downhill into the town where I live.   Naturally I was cruising down it, having fun and loving life.  There was a good size rock in the road that I swerved around so i wouldn’t crash into it.  Only it wasn’t a rock; it was a pretty large turtle enjoying the warm wet asphalt.  I slowed to a stop and looped around to get him or her out of the street before it got run over.
As i looped around to get Mrs. Turtle a man in an SUV drove by and drove right over her.  I  could here the screech and pop of the shell being only 10 or so feet away.  I was shocked and devastated.   It appeared to me that he did it on purpose.  Normally wouldn’t you swerve just a bit for a rock or turtle on the street  If he did run that turtle over on purpose then in my opinion he has serious issues.
I thought of going and clearing the now dead turtle off the street but I am sad to admit that I couldn’t face it.  Mrs. Turtle was already dead and I was more than confused.  That is such a cruel act.  Riding the rest of the way home I thought of the abundance of wildlife that I had seen in just the previous week.
Sometime’s I tried to get a picture but couldn’t get the phone out of the jersey pocket quick enough.  Other time’s I just watched and enjoyed.  Last week alone I saw countless baby duckling’s and their mother’s, lot’s of deer and probably 10 or so spotted babies, a lone turkey walking next to the road, and a baby fox that was warming in the street.  The fox was only about as long as my forearm and half tail.  He bounced away when I slowed to look and my freehub body sprang to life WIRRRRIng the baby fox away.
It is upon reflecting back on all I have seen in the last week alone that I realized that not only is the earth coming back to life, but so is my love of riding.  I don’t feel like i have to ride to train for something, I want to ride to be outside and take in the surrounding’s.
Yesterday I was happy to be able to redeem my inability to help Mrs. Turtle.  Riding down the road I found this guy sitting on the white line. 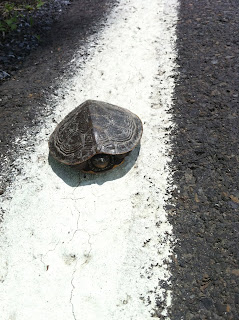 I moved him a ways in to the grass and mud off tot he side of the road.  All the while car’s were honking at me because I was stopped off the side of the road with the bike leaning on the guard rail.  I was happy I had moved him, he was not so sure. 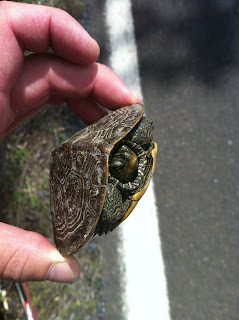 Look around while you are riding, be aware, take in the sight’s.  You will see some wonderful things.  Heck you might even find some cool stuff.  I have had lots of interesting road finds in my years.  I even found what is probably the most used tool on my workbench while riding. 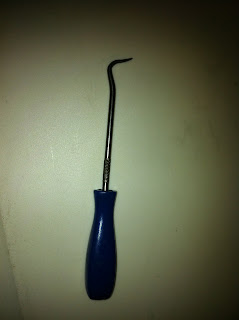 Go ride your bicycle and revel in where it can take you.