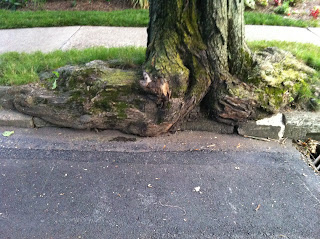 “I like trees because they seem more resigned to the way they have to live than other things do.”  ~Willa Cather


I have been a bit obsessed with nature taking over lately.  When I see it I have to take a picture.  When I categorize them all I will start a new photo album over on the MLBB FB page.

Last Wednesday I wrote about my encounter with Cujo, and how my wheels seem to be taking a beating.  Today I found out how bad of a beating the rear wheel took.


I finally (A weeek and a half later) took the rear wheel in to get trued.  It got worse after me riding it for a week and on  Monday’s ride with the LRHG I had to open the brake caliper in order for it to clear.  Yes it was past due.


Today I took it to my friends at Bicycle Pro.  As usual Fred and Collin took care of me and my bike.  I am an OK mechanic these guys are pro’s.  Hence the name.  They fixed my Sram S-40 front wheel and when getting ready to true my rear R-Sys wheel I saw this. 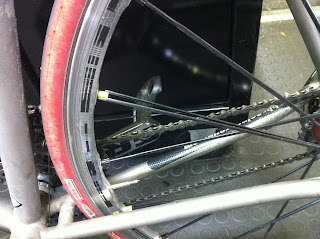 Lot’s of people are frightened by the R-Sys wheels after the whole Velonews incident of 2009.  I have always had faith in the wheel after many friends had a spoke break and were able to keep riding.  I did just that.  T-Rav and I rode probably 40 miles this AM with the broken spoke.


Hopefully all things come in three’s and I am done with wheel issues for the year.


Now I just need to stay away from Cujo.
I dont recommend riding with a broken spoke but it was nice that the wheel held up.