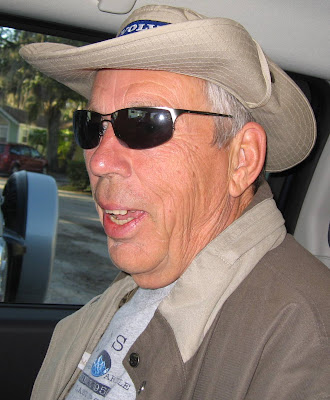 Amy B posted this up on the Facebook. She said her Dad had posted it and I thought it would go along well with today’s topic. So much so that I moved my Father’s Day post up to go along with the quote as opposed to waiting until Friday which would be closer.

Before I started riding on Saturday I figured I had a blog entry wrapped up easy. I figured all along that it would be about my ride and the things I experienced and saw on my trip length-wise across the Garden State. I was only half right.

As I stated on Monday the day started in the fog early. I was rolling along feeling good, enjoying the fog and crisp air. It was nice to have the lights from the spruck guiding me and out of nowhere WHAM!!! It hit me like I eventually would hit the ground. This could be the last time I do this with my Dad.

This took awhile to sink in. Going back in my life I have always had him to lean on. I still do but in the last few years the dynamic has changed. Now sometimes he asks me for advice. I hope I can give him the solid advice he has given to me.

Now some background. My Father is actually my Step-Father. He has been and acted like my Father for so long that I cant refer to him any other way. I know that he would step in front of a bus for me. It’s just one of those things I would never question.

One of the things that I wish I could pull back in my life was a time that he tried to help me and I wouldn’t take it.

As a teenager it was one of the darkest times in my life and he reached out to help me–literally. He reached his hands out and I punched him in the mouth–literally. We wrestled to the ground and he just let me go. I’m sure he could have kicked my ass. As I got older I understood that wasn’t the point. If I could pull that one moment back in time, I would.

I use that story to demonstrate that even after some brat that wasn’t his child lashed out at him he still hung in and proved to be a great man.

I don’t remember being moved one way or another when my mother told me she was going to get remarried. The only thing I was sure of was that I wanted someone who would put my mother on a pedestal and treat her like a queen. He fulfilled this and more.

As I grew I understood that he was truly interested in me. He would take me to the BMX track to race. Not content to sit still and just watch he decided to be an active participant. No he didn’t race a bike, but he would marshall the turns at the track. Before my moto’s he would call me down and tell me what lines the fast guys were taking. He would get me to watch the top pros and learn how they got through the turns.

The same came to teaching me how to work with and respect tools. Dad wasn’t a bike mechanic but he new the basics and like Spicoli said, he had “A Bitchin set of tool’s”. My Dad fixed Microfiche machine’s and was one of the best in the world at what he did. He would be flying around the world at a moments notice. Often times he took my mother with him to see the world. At times he even took me with him. This is probably where I got my will to travel.

It always appeared to me that he could fix or build anything. He took two years of spare time to rebuild a T.V. when I was a kid. I can hear you already “Two Years?? Big deal! What took so long?” The thing about the T.V. was that the antenna (remember those) was struck by lightning and it fried the insides. Dad spent the time to re-solder every circuit in the set, and do countless things that I don’t know or understand. The T.V. worked for years after he was done with it. This is a great example of how patient and intelligent he is all at once.

A few years ago Dad had a stroke. My mother and I spent quite a bit of time wondering if he was going to live. When we figured out that he was indeed going to live the concern switched. Now we started to wonder what his life would be like after this. What my Mother’s life would be like? Would he be able to speak? Walk? Take care of himself? All of this came around. If anything my Father was more open and communicative. He embraced life and has gotten as much out of it as he could. He has embraced his relationship’s and experiences in life.

I hadn’t spent large amounts of time with my Father as of late so I was looking forward to doing this Longest Day ride with him. He liked driving behind with the flashers on, scooting ahead and telling me which way the route went. And I have to admit I like the way he is so enamored with the fact that I will suffer for so long while riding a bike. I believe there is something deeply ingrained in us that will always be happy when our parent’s are proud of us.

The drive up was nice. We talked and chatted about various things. Guy stuff, mainly, how his remote control boat was working, how the workshop was being set-up, etc. We stopped and had a nice dinner. Sometimes we talked and often times we sat in silence. Not uncomfortable silence, but comfortable familiar silence. It was just nice to be with him. I did realize that he is slowing down a bit. Not in a wildly disturbing kind of way but in a 70ish year old man kind of way.

I guess that this thought is what occurred to me while riding on Saturday morning. My Dad is slowing down, and this could be the last time we could do this together. I hope not because I enjoy this time with him, and I know he does as well. This may have been a small determining factor on why I got back up and kept riding. I wanted to spend more time with my Dad, and part of me didn’t want to let him down. That and I am stubborn as a freakin mule.

I’ve already admitted in the past that I’m a “Momma’s Boy”, guess my “Dad” had some major influence as well.

I’m amazed what I learn about myself while sitting on the saddle of a bike.