The build up to Nittany Lion Cross
This past weekend September 10th and 11th kicked off Cyclo-cross season in the Mid Atlantic.  The Nittany Lion Cross race offered up the first UCI CX points on the planet.  To capitalize on this fact fast guy Jeremy Powers came out.  He won as expected but he had some pressure from visiting euro’s.
This post isn’t a recap of fast guys racing you can find that over at Cylocross magazine.  This is about the every day guy racing.
I raced a few cross races last year and enjoyed the hell out of it so I am racing more this year and have decided to do as much of the MAC series as possible.  Nittany kicked that off.  Of course I was anxious to line up but there was just one catch.  I didn’t have a bike.
As seems to be par for the course these day’s Cross bike’s arrived at dealers late and people were scrambling like crazy.
I digress here for a moment.  This year for the first time in my life I am racing on a team.  It even sound’s weird to me that at this advanced age and having ridden and dabbled on and off with racing I have never raced for a team. Guess I have never been much of a joiner.  There was a brief stint in college racing for Temple’s “Cycling Club” but that was a bit like the Bad News Bears on bikes.
The team  I am racing for is C3.  They are one of the most established cross team’s on the circuit.  Kris Auer heads up the team and was gracious enough to invite me aboard.  I guess they were in need of a mid pack C level racer.

This brings me back to where I veered off course.  Back to the bike.  Since splitting with BMC  I gave all of my swiss machinery back and was cross bikeless.  Kris graciously got me a Blue.  He was going to get me this frame … 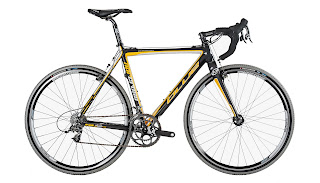 This meant it was getting close to cross season and I was bikeless.  Finally the Wednesday before race weekend I got my bike and it turned out to be this…

I was only mildly bummed but happy to have a bike to build.  Kris traded me red Sram brake hood to replace the yellow ones I got and I was ready to build the bike.  BUT….
All of my parts weren’t here yet.  I didn’t have my snazzy new Easton EC 90 Aero wheels yet so I had to dig into my basement stock and find another pair to ride.  The stem that I wanted was temporarily out of stock so once again I dove headfirst into the pile of bike parts in my basement and came up for air with a fitting if not company correct replacement.
Here is where I heap praise upon Mr. Auer again.  If you have ever put together a team and amassed sponsors  (Which I have) you know what a huge amount of work it can be.  On top of that work you want the riders that are out representing you also representing the sponsors.  That is why companies give sponsorship.  We had a very frank conversation when I started that I would represent as many of his sponsor’s as possible, but me representing different brand’s I would be using their product’s.
He was very cool with that and understood.  That was why I chose the Blue frame, to represent.  Since I sell Easton part’s I am riding them and I am sporting a Giro helmet although I will be rotating a Bell in as well to keep Don happy.  (Rule of thumb ALWAYS keep Don happy).  Additionally I am using Oakley’s because Mr. Blick and Mr. Engler are always so good to me that to wear anything else would be just f’n rude.  Plus the optic’s kick ass.
This is getting long so next post will be a brief Nittany Cross report.
For now relax kick back and I hope someone brings you a Schlitz. 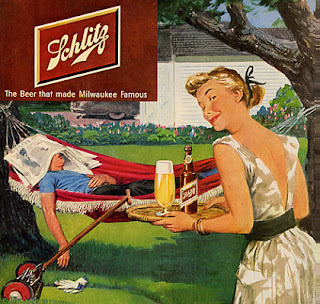 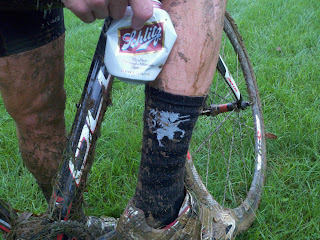 Although mine was handed up as I was being a mouth breather and being yelled at.  Hammock time never materialized.