“One of the most important days of my life was when I learned to ride a bicycle.”

Obviously I like to ride bicycles.  I am guessing that the overwhelming majority of you do as well.  As a child my bicycle was my freedom, my escape.  It grew to be my transportation, then my profession.  Many in my life would say, and have said that it’s my obsession.

Now try to imagine never having learned to ride a bicycle.  How would your life be different?

Mine would be WAY different that is for sure.  I still remember learning.  My mom running behind me holding me up.  Me saying “do you promise not to let me go?”  Her saying yes, and then letting go, and letting me ride down the street.  Me getting to the end of the street and not being able to turn around.  Hitting that HUGE rock and crashing like only a five year old can.  Catapulting over the bars, pinwheelinig through the air and rolling like a rag doll.  Getting up crying, covered in grass stains, and hopping right back on the bike. That was probably one of the best lies my mother ever told me. 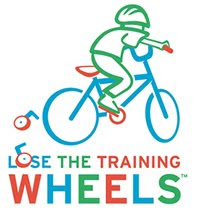 This week I have been volunteering for Lose the Training Wheels.  This is an organization that helps to teach children with disabilities how to ride a bicycle on two wheels.  I learned about this through Selene Yeager Bicycling Magazine’s Fit Chick.  I enjoy Selene’s writing and view on life.  When I read her account of helping a child learn to ride I knew that I was going to do the same.
Lose the Training Wheels is an organization that teaches children with disabilities how to ride a bicycle.  Learning a bicycle is not easy for these children (as I am finding out).  As Matt the Director of the program explained this is so much more than riding a bicycle.  Riding a bicycle is a road to acceptance for many of these children.  Matt explained that after seven years (yes 7 years) of  teaching his son with many bruises bumps and even broken teeth he could not teach his son to ride.  He gave up.  Then he found this program.  After seven days, not years, his son was riding a bicycle on his own.
He explained that this was a light switch moment for his son.  The light switch turned on and he had a world of possibilities opened to him.  His son was accepted more openly by the kids in the neighborhood.  He can now go ride to the creek and play.  Instead of sitting on the sofa he wants to ride his bike.  Matt explained that exercise was not something his son was into.  Now he is more active and fit.
Matt went onto explain that his son will never be able to drive a car.  The bicycle will allow him to transition into having a job and act as his transportation.  As I have said before the bicycle truly can be a vehicle for change.  The ability to ride one is LITERALLY changing these children’s lives.
I started this week and it is amazingly satisfying, hard work.  My eldest daughter agreed to go with me and one of her friends is helping as well.  This time spent with them is so uplifting.  Yes there is hope for the next generation.  These kids want to help and are concerned for the children we are teaching.  I have watched both of them take an active role in making sure that the children we are “teaching” are engaged and progressing.  My daughter has shown me a few tricks to help the child we are working with and it’s working.
The boy we are working with is one of three boys from the same family in the program.  These boys parents are wonderful.  It is apparent that they truly care for these boys.  That said,  WOW what a tough job they have.  Keeping these boys focused and on point has got to be exhausting.  Yet the parents are smiling and so thankful.
I will get some pictures of the “Bikes” that they are using to teach with.  They are really cool.  Friday I will tell you about their method of teaching.  In the mean time   I am going to go peddle some bicycles so that I can go teach some children how to pedal some bicycles.