“Our dog chases people on a bike. We’ve had to take it off him.”   Winston Churchill
This is the year of messing up wheels for me.  First the rear wheel on my spare set decided it was time for life support, then the front wheel on my Sram S40’s decided it didn’t like where it was, and Saturday Cujo decided that he didn’t like my rear wheel and hurled himself at it.
Saturday the LRHG and I were doing the Ride 4 Autism with Rich and LJF, friends from the YSC Tour de Pink.  It was a good ride for a good cause.  The G4 crew put on the event so there was no doubt it would be a good ride.  Anyone who thinks that New Jersey is all smoke stacks and traffic watches too much TV or never gets off the Parkway by Newark.  The ride was laid out well and had very little traffic as it wound through lots of horse farms.
Wait…. I was talking about wheels.  The LRHG and I were rolling up to the second rest stop of the day and along came Cujo at top speed out of someone’s front yard. 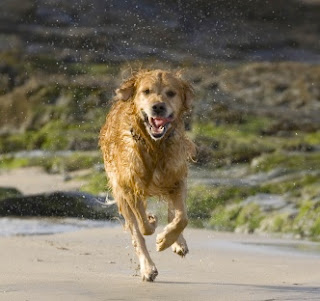 This dog was hauling, and not barking.  In hind-sight I think the reason that I saw the dog was because I was talking to LRHG and her eyes got as big as saucers.  I looked to the opposite side and saw the dog closing in FAST.
One thing I learned long ago on the bike is that most chasing dog’s respond to a loud NO, screamed in my deepest voice.  The NO did not distract Cujo.  He kept coming at me.
I have been chased by dogs before.  I have tried to out sprint them and even had to kick at them to avoid getting bitten.  Not this time.  He came at me so fast and unexpected that he slammed straight into my rear wheel.  Thanks to years of Bmx and Mountain biking I didn’t go down but Cujo went spinning off of it.
Last we saw of him he was high-tailing it back to his back yard.  LRHG says she thinks he looked a bit like this though. 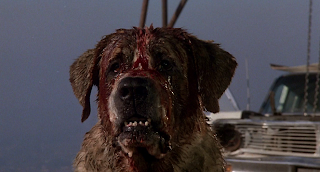 I am guessing that much like a child touching a hot stove, Cujo will not be head butting bikes again any time soon.
Back to wheels.  Now my rear wheel needs help.  Third wheel this season.
I made a new friend on the ride too.
After the ride LJF was having a party.  We would have liked to stayed but couldn’t.  That didn’t stop us from stopping by for a post ride adult beverage.  When I saw her amazing cake I knew I was gonna miss a good time. 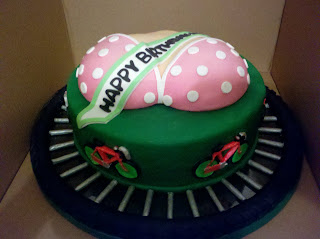 LJF is a two time breast cancer survivor and a co founder of the YSC Tour de Pink.  The cake incorporated her theme for the party.  Boob’s, Bikes, and Birthdays.  Yes it was all edible.
From the random news department.  My Squash is very happy. 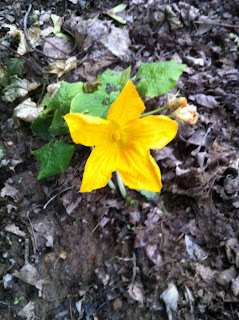 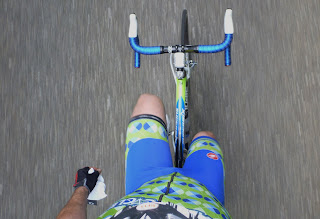 I suggest we all follow J’s lead and go ride our bicycles.