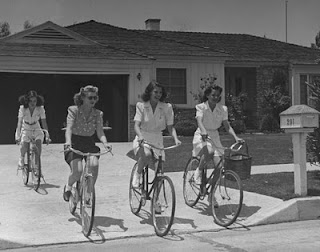 It’s been awhile since I posted a black and white photo at the top and I like them SO even if it doesn’t have anything to do with today’s rambling I’m doing it.  After all pictures of pretty girls on bicycles is never a bad thing in my opinion.
“Opinions are like A*#holes everyone has one and they all stink.”  My Grandfather
My grandfather had a few good ones like that he would use from time to time.  It may sound like something from Sh*t my dad says but that was just my childhood.  Pop-pop was cool like that.
I got to thinking about that quote because the fine folks over at Bicycling magazine did a story on the 9 cycling movies you cant miss.  Now the fine folks over at My Life Behind bars (that’s me) did a similar post back in April of this year.
While I did not choose 9 movies I did rattle off 3.  They only chose 2 of those leaving out the cheesiest of all 80’s cycling flicks Quicksilver.  They did include the movie Key Exchange which I had never even heard of.  I guess I am going to have to watch another crappy 80’s bike movie and check it out.
They also included The Triplets of Belleville.  This is a fantastic quirky movie with a great soundtrack.  Just thinking about it I’m gonna go dig out the CD and load it into my Itunes.
This song will most likely get stuck in your head.
The conclusion of Bicycling magazine was the same as mine.  The Greatest Bicycle movie of ALL TIME is Pee Wee’s Big Adventure.  Who can argue with a movie that is about a boy and his bike. It amuses me that my fancy webtraffic reporting thingie tells  me that the most referrals I get from Google are for “Pee Wee Herman” or for this picture I posted once of Pee Wee 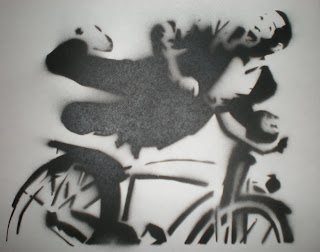 Pee Wee Herman Stencil by Wildabeast 76
Time to go get my butt handed to me on the bicycle.  Au Revoir