Wednesday Quote an Ode to Mud 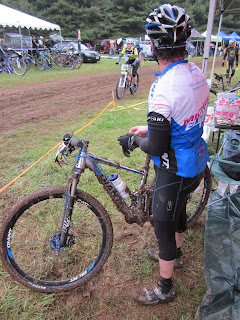 “But in the mud and scum of things, There always, something sings” Ralph Waldo Emerson

The last few miles of the 9 mile loop were in a nice pine grove.  The metallic noise got regular here, almost melodic.  I started to sense that the frequency was timed, when it dawned on me.  It was my lung’s as I was breathing.

Now I realize that a bit of suffering is the name of the game in endurance racing but that was when I gave in to the inner voice that had been nagging me almost all day.  It was saying, no, screaming… STOP!!!

It had rained all day and most of the night before the Bakers Dozen and the mud was thick and classic east coast peanut butter consistency.  Not Skippy or Jif creamy consistency but organic thick peanut butter, with some Potomac river basin clay thrown in just to add weight to the bike.

The first lap was the worst and the bike gained 10-15 pounds of mud.  After that most of the mud from the course was on my bike. (Fred’s bike) The remaining laps we didn’t have to slice through the deep standing mud.  This didn’t make it altogether easier for the rest of the day.

The course turned to Velcro.  Not the Velcro hero dirt that my Left Coast brethren refer to.  This was more like the mud was holding your wheel to the ground not letting it roll freely.  I heard it accurately described as feeling like riding the trainer all day.

For an idea of the progression of the day see the picture below.  On the left was the 1st bottle used, center a bottle from the middle of the day, and then the last bottle of the day.  In all I used 9 or 10 bottles. 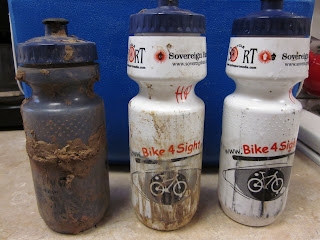 The race was well done as it was in 09 when I did it as well.  Kudo’s to the chap’s at Plum Grove Cyclery.  Last time it was unseasonably hot and the laps were shorter.  In those conditions I was able to pull out 120-130 miles and barely grab 11th place.  Losing a case of Chimay to T-Rav in the process.  This time I only lasted about 10 hours and think I grabbed a 10th place with only 72 miles.  I will have to see official results when they are finally posted.  The mud and tough conditions were definitely slowing down things.

I channeled my “Inner Michelle Weiser” Following her motto “Do what you want to do before it’s too late”  I wanted to ride my bike all day, and I did.

Unfortunately the Unicorn Helmet never saw action because my only “Nightish” lap was taken care of by the bar mount that I had on in just in case. 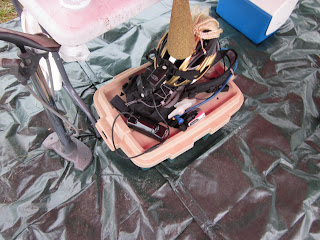 Driving home the next day I turned on the radio and this was on.

I am off on a last minute trip to Sea Otter.  I’ve already seen shenanigans from Jeff Lenosky and Kyle Ebbet.  Pic’s and stories to follow.  Although I’m sure some will be withheld to protect the innocent (and guilty)