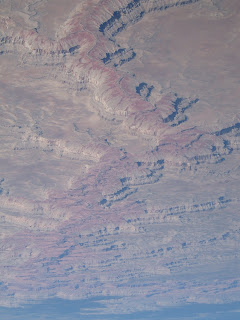 “How can you practice dancing in an airplane? There’s a law against it.”   George Murphy

This was written on Saturday….

It was a rare flight to Las Vegas. Vegas isn’t generally my favorite town, least of all for a week. The prospect of driving BMC to prominence in the US actually put some pep in me though. I started the day in good spirits and they continued.

The drive to the airport was highlighted by new music. I have found an ear for funk and have been listening to some newer stuff with a strong Motown influence. It keeps my speakers thumping and me dancing in my seat. Mix some of that new in with some older funk and of course some Stevie Wonder and it’s a good start to any day.
Once at the airport I breezed right through everything. It helps to know the drill. Computer out, shoes off pockets empty yadda yadda. It does seem weird getting up early to fly to Vegas though.
The reason I was compelled to grab the computer out of the bag and bang on the keyboard was that I have had a rare occurrence flying today. There were virtually no clouds across the entire country. The occasional cloud let me see it’s shadow on the ground. I tried to read but kept setting my garbage crime novel du jour aside and simply looking at the country go by underneath me.
It is interesting to see how different parts of the country look from above. It’s a perspective that is totally different from the one I get behind the bars. Quite frankly it has fueled my desire to see this whole country from the saddle of my bike. Start with my rear wheel in the Atlantic and ride until my front is in the Pacific. Then turn around and go back an entirely different way.
What a way to meet people, see things, and encounter different ways to do things. If I may be so bold: us cyclists are blessed with a truly unique way to experience our surroundings. We just need to be open to taking these experiences in.
Back to the cloudless flight. The groundscape (I think I just made up a word) changes so dramatically from area to area. Taking off from Philly there is quite a bit of population. You get to see houses and roads and other manmade structures. Peering down into quarries is one of my favorites. They just look so different from above.

As the manmade sights start to dwindle the rural scene takes over and it strikes me how much space there is and even though I know that us humans have built a ton here there is still a lot of open space. The rural scenery is still very green but I can see signs of autumn color creeping in even from above. Occasionally I see a small airplane flying underneath and it comes to my attention first because I see it’s shadow. Then I can track down the plane.

The green rolling hills make way for the patchwork quilt that is farmland. While on the ground it is hard to know that everything is so geometric. From the air it’s almost comical. A series of rectangles and squares in varying colors. I believe the colors to be dependendant on what crops are growing or whether the area has been tilled recently. The ones that always catch my eye are the big squares with circles in them. Again I am going to have to go with “I believe” because I’m not a country boy. But I believe that these are the path of the watering devices. Anchored at the center and traveling around the circle like a big compass.

The geometric pattern gives way to a more random appearance as the landscape becomes hilly. Much more green appears and small spots of the autumn show again. Here instead of the streets looking like they are laid out with a ruler they appear to be completely nonsensical. As if a child grabbed a crayon and started drawing, or a business person doodled on a note pad while the person on the other end talks believing that they are being listened to intently.

Then into the desert. Vast areas of brown. Occasional long winding roads following the terrain of the land. The areas of green that are high plateaus and the deep swaths of reds that cut into the earth creating valleys and gullies. Every once in a while a lake or body of water surprises on top of the plateaus or mesa’s, or whatever they may be called. I am not sure if that was the Grand Canyon we just passed over but it was sure big. The canyon’s were breathtaking. The two people next to me were practically in my seat with me and justifiably so. The view was first class even if the sweating wasn’t. I was glad the cute girl was closer too me. It wasn’t as uncomfortable having her almost sit on my lap as it would have been if he had done the same. I finally figured out I should get my camera out. 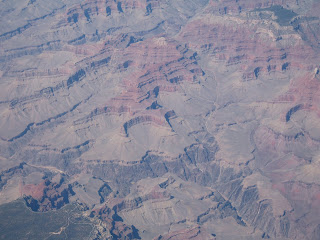 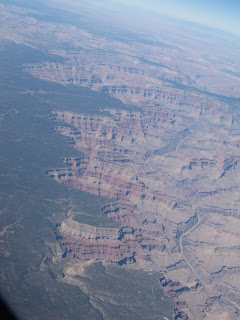 All the while small (or they seem small) clusters of humanity. Humans like to live close even if most people tell you otherwise. There is the occasional building out in nowheresville. There must be more that you can’t see from 30,000 feet, and how big must the ones you can see from up here be?

What a great opportunity to see all of the terrain, color and texture differences from up high. I am quite sure it is Mother Nature telling me to go explore them. She is imploring me to ride more, explore more, and experience more. Like a good Momma’s Boy I will follow Mother Nature’s advice. The states are calling me and asking me to put tire tracks all over them. Hear that sound? That’s not the wind, that is Mother Nature telling you to get outside and bask in her glory. I’m gonna choose to do so by bicycle.

My apologies for the lack of pictures but the splendor finally sunk in too late.

I’m gonna put away the computer and blissfully stare out the window and watch America go by. Thanks mother nature. I’ll visit.

An Interbike update or two are to follow.  In the meantime I am trying to scrub out of places it just doesn’t belong.