This is fun. Right? 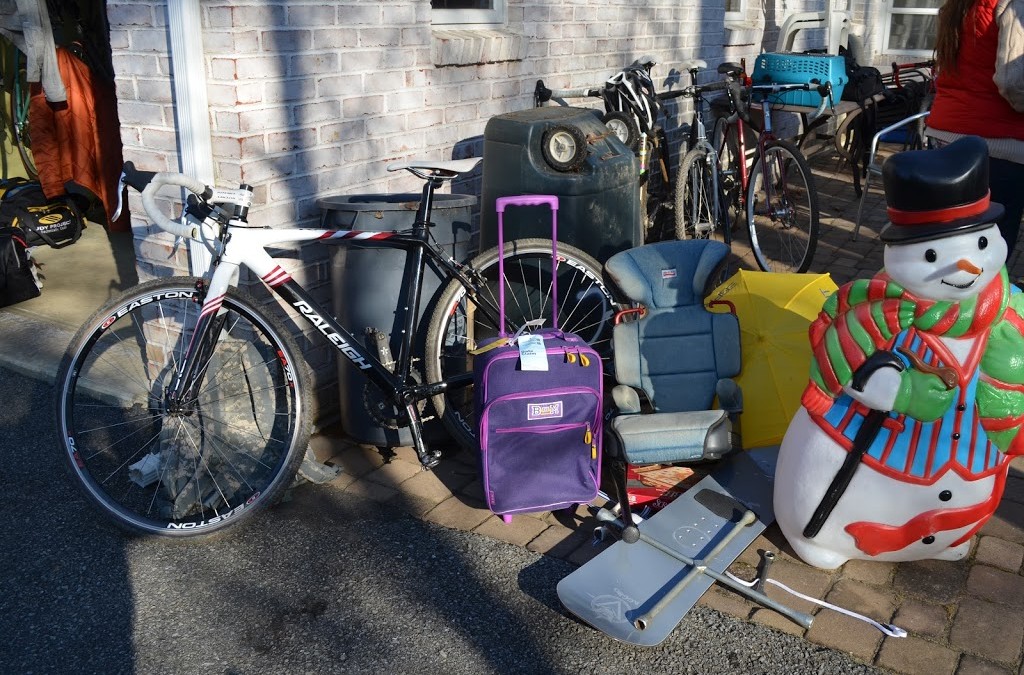 Cyclocross has been a blast this year. I have raced half as many races but still had fun.  I didn’t skip things to race but made racing fit my schedule.  Because of this I missed a few venues I like.  Crossasaurus Awesome and Kutztown which was now a two day race.

My goals for the season were just one.  Get faster.  That cut into some fun rides and longer just wandering rides.  But on the average it did help.  In the beginning it was difficult to tell.  I did the “Right” thing. (in my mind) and upgraded to the B race.  This meant I was getting thumped!

I raced a few of the NJ series and they had a 40+ Cat 4 series.  Since I was technically still a 4 I raced in that cat.  Then I realized I was moving up some.  The placing’s were more to my liking.

Still a little something was missing.  I raced a singlespeed event at the very beginning of the season and enjoyed the party like atmosphere.  Most of these races were at the end of the day.  I figured I could race early, go hard, keep some fitness, then party race later in the day.  That never worked out.

Luckily Beth invited me to a running of the original 5th street.  This turned things around.  Hanging out with a bunch of like minded people and “playing” bicycle is good for the soul.

We started the days Stage Race with an up-hill TT with a twist.  Everyone was assigned an item and then had to carry that item uphill to the finish.  These weren’t just any items.  Look at the picture above.  I felt lucky to only have to carry the lug wrench laying on the snowboard.  How do you ride up-hill with a snowboard?  Like this.

YARNALL did despicable things to the snowman. 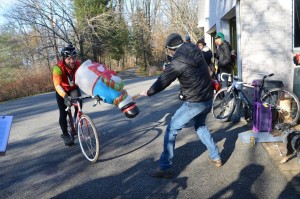 Watching Cush ride up hill with a VCR tied to his seatpost and dragging behind him made me laugh harder than possibly any transport up the hill.

There were several other race’s through the day.  Hotly contested and possibly a bit of foul play involved.

Then my biggest chance of standing top step of the podium on the season presented itself.  The Slow Race.  Slow Race?  That sounded tailor made for me.  Being a bit of an unknown in the crowd I sat back and let everyone roll off the line.  I probably sat at the start line track standing for 5 or more minutes before slowly rolling up the driveway a safe distance from everyone else.

The race was mine.  I patiently sat and waited.  Thorpe tried to freak me out.  He rode circles around me, blew in my ear, and hollered a bit, but I stayed put.  Others fell at getting antagonized.

Finally I got close enough to see it was a 3 man race.  Topher and Peet-o were close to the line.  They seemed to be wavering a bit.  All of the time as a youth practicing BMX gate starts and long winters staying occupied in the bike shop was finally paying off.

Truth be told it was getting a little tedious.  We all could have gone several minutes more.  Then the officials added some obstacles.  We had to pound a beer.  Nothing left in the can and no putting a foot down.  Acting professional we all acheived this.  There may have been a second added.  There may have been a flask obstacle.

I could see Peet-O and Topher. 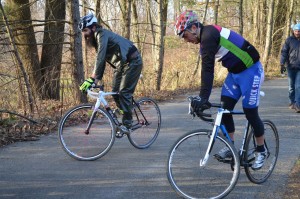 This had gone on long enough. I figured it was time for aggressive slow racing.  I sprinted at Topher and straight armed him as hard as I could to knock him over.  It didn’t work.  My foot hit the ground.

At that point it seemed only appropriate that I give them a bit of the Thorpe treatment. 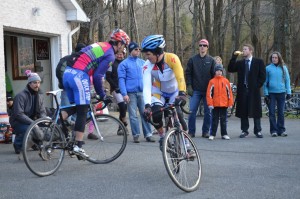 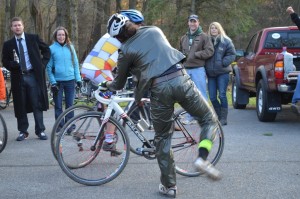 After the protest. It was decided that Peet-O won

Thanks Beth and Bill for injecting the fun back into the season. 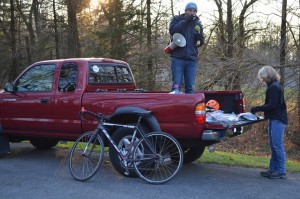