This is a Bicycle Blog 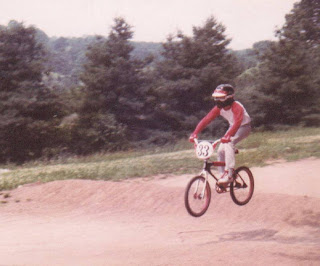 That picture above was taken when I was 13(ish).  Riding bikes has been in my blood for as long as I can remember.  It seems like I have not written about riding in awhile.  So I’m gonna do just that.
This weekend I had some excellent riding.  Saturday was just a good ride. Then Sunday I rode in the Gran Fondo Colnago.  Having ridden in many organized rides in my life I must admit that I am slightly jaded.  You know the deal “A ride is a ride”  Only this ride wasnt a just a ride.  I got lined up in the front row of 1700 people.  Cool, Right?  That’s only the beginning.  Being lined up at the front meant that I was behind three Ferrari’s and two Ducati’s that lead out the ride.  Now that was cool!
Being at the front meant that I had to ride like I belonged there.  I did that for about 45 or 50 minutes.  We rolled out at 27 or 28 miles per hour once the Ferrari’s pulled off.  Ironic huh?  The Ferrari’s were actually holding us back because they were only there for the parade lap.
I figure that was good Cyclocross training.  I went harder for 45 minutes then I have for a long time.  This will set me up perfectly to be pack fodder at cross races.  I bowed out of the lead group and started enjoying myself.  I rode with several groups.  Some I chatted with some I didn’t.
I rode with and changed a flat for a member of the Colnago family. I reunited with a friend of mine who happens to run a little company you may have heard of. CAMPAGNOLO.  Yeah, I’m name dropping, but only to point out that I had a great time.  This also points out that I have made many connections and many lifelong friends in this community of cyclist’s.
Also cycling related. Q sent me this cycling video.  Hope you enjoy it as much as I did.