The State of Cycling is Good

I took a quick trip to Ohio to work a sale at Roll in Ohio.  Roll has three stores and is a cool shop.  Stuart who owns the joint used to be a designer in his past life.  I should say that he still is a designer because the store was excellent.  Great branding and displays.  I took about 20 pictures to document this event and the store but every one of them was fuzzy except this one. 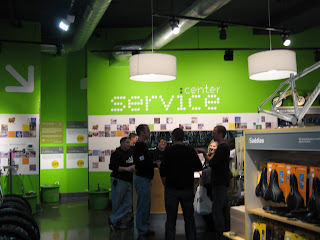 I have been in hundreds of bicycle stores.  You are gonna have to take my word that this is quite well done.

The event that Roll was hosting was called Be:Spoke and it was an event to expose (and sell) customer’s to some of the more boutique offerings available.  The turnout was great with the store busy for the entire four hours.

I darn near lost my voice talking about BMC’s and the reception was excellent.  People were pumped on the new 2011 offerings and folks who already owned BMC’s were more than happy to come and talk about them.

To celebrate the event Stuart had many customers bikes on display.  Check out my fuzzy picture to see. 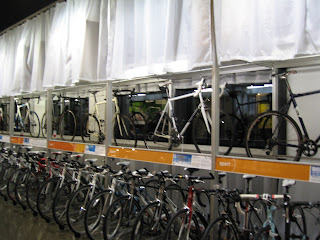 I guess it may be new camera o’clock.  Time to requisition funds from the accounting staff at velorambling.com.

Unfortunately last time I did an accurate accounting of the funds that velorambling has in the account it amounted to some pocket lint.

Nice Job Roll.  Thanks for having me.  Next time we will ride.

Columbus has a cancer fundraising ride called Pelotonia and they are pumped on it.  This huge display was in the airport. 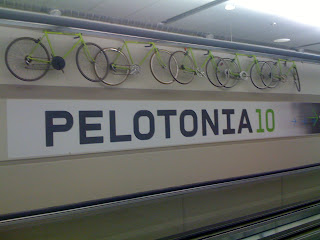 From all of the people I spoke to it is a very well run ride.  Any of the regular readers know of my extreme hatred for cancer so I am gonna endorse this ride. I may have to add it to the growing number of rides I want to do.  Plus now I have some new friends in Columbus.  Maybe someone will offer up a couch.

Following my theme of the week.   I offer up another song about bicycles this one from Tom Waits.  I am not a huge fan of his voice, heck I am not even a fan of the song but it is titled Broken Bicycles.  So I am almost obliged to post it.

By Broken Bicycles I get the feeling it was a metaphor for something else.  I don’t think he was talking about this…

I am sitting in the airport writing this and I have to vent to the readers of MLBB (Hi Mom) that putting an infant on a leash is just wrong.  I am watching a woman and I will assume her parents sit and laugh as a small girl is running and hitting the end of the leash.  Kind of running in a semi circle at the end.  Think dog on a chain running and getting snapped back at the end.  It is maddening to watch.  Thanks for listening to the vent.

Have a radtacular weekend and ride your bike.