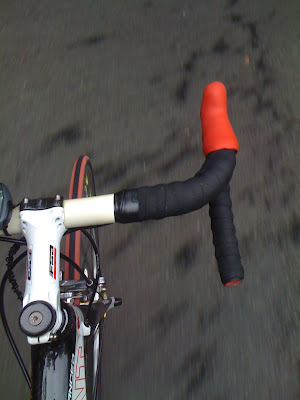 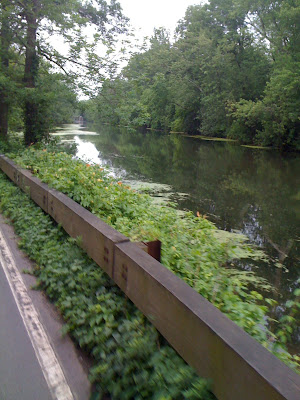 Some scenes from behind bars.

Monday morning and I sit here a little sore but satisfied. My Father and I started out at 4:15ish AM Saturday morning; we went and got ice for the cooler and some coffee to power him along. Finally we hit the road about 4:30-4:40ish. I rode and he followed in the Spruck with the flashers on. The fog was thick and beautiful—it felt like riding in a cloud.

I finished the ride with approximately 215-220 miles thanks to a few missed turns. It took me a hair over 13 hours of riding time, but about 15 hours thanks to stops. One of those stops was most unexpected and unappreciated.

Even though my training was not what I had wanted, I was moving along well. I was on pace for a good 5 1/2 hour first century, and that is damn good for me. There was still plenty in the tank, and I was staying hydrated thanks to some planning and preparation the night before. I even had a few adult beverages chilling as my reward for a day Behind Bars. 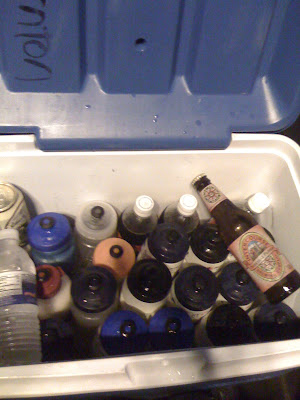 At Mile 85, Dad had pulled over to point me in the right direction and I filled up with 2 fresh bottles and some grub for the next hour. Things were going great and then not 1/4 mile further I found myself in a heap on the side of the road.

I know better, but while going down an incline I was reading my cue sheet trying to figure out the next few turns. Cue sheet in my right hand, left hand on the brake hood. By some bizarre Department of Transportation decision there was a small random speed bump in the middle of the descent; I didn’t see it and whacked it. HARD! You can guess what happened next. With all the weight on my left hand, the bike went down on the left-hand side. Like a rock skipping across the surface of the water, I hit the ground doing about 30 mph and slid into the grass on the side of the road. Luckily there was no curb to end my slide and I took no one down with me.

One brand new Giant Mid Atlantic Cycling Team kit down the tubes, and a considerable amount of epidermis left on the pavement outside of Princeton NJ. 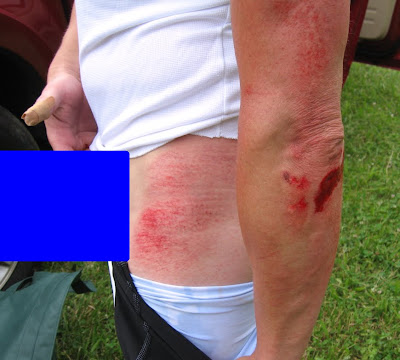 Edited for modesty, My modesty. 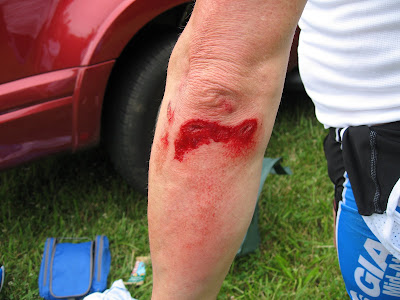 I was lucky—it is merely a flesh wound or 8. After I screamed and cursed loudly stringing together words that I didn’t know actually went together. My apologies to any parents of small children in the Garden State on Saturday. I changed my clothes found the first-aid kit and decided to try riding the rest.

Well, I was successful. I finished the entire ride, met up with some good people on the road to help pull me along, and even got my dad to motorpace me in the spruck for a couple of miles. The reflection from the tailgate was cool and I tried to get a pic. YES, even after hitting the deck I got my iPhone out and snapped a pic drafting the Spruck at 20ish mph. 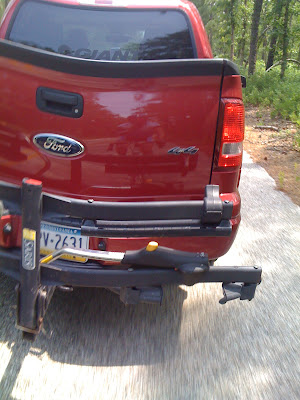 You can kinda see me in the reflection. Neat the way the tailgate top is distorted.

Tom from Fuji stopped to see if I was OK. I even hooked up with his group at the end and rode into Cape May with him. Tom’s a CLASS ACT. 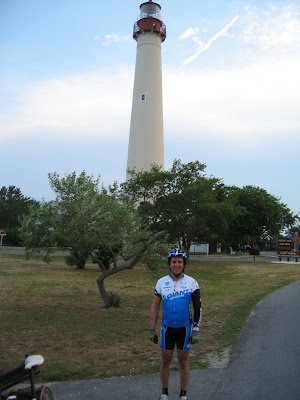 This was the reward at the end of the day.

I know I said it would be a quick recap. That was as quick as I could manage. I never said I don’t ramble.

I will end with this picture of a happy me. Note the arm-warmer on the left arm that I used to hold the bandages on and stop my torn up skin from getting sunburned. Burnt skin on top of everything else would have been BAD. 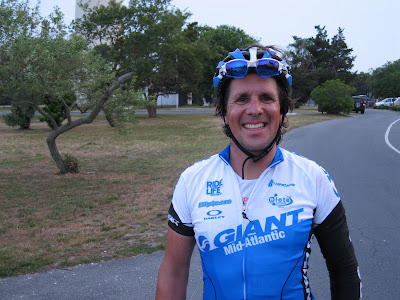