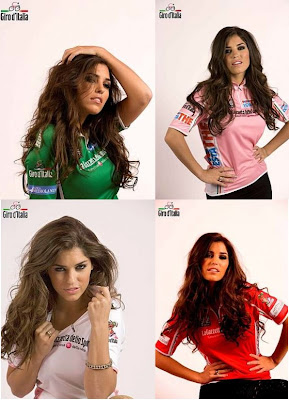 I saw this pic over here and had to post it.

The jerseys present quite well in the pic above but watching the awards coverage makes me think that the Giro could learn something about the ceremony from the Tour Day France (Bob Roll pronunciation). The tour is very clean and professional on the Podium. The Badger sidles up behind the rider and slides the jersey effortlessly on thanks to the zipper on the back. These jerseys are for the podium only and the real jerseys are presented later.

Watching the riders receive their jerseys at the Giro they have to pull them over their heads. This looks awkward but also presents a few logistical problems.

1. The rider on the podium has Swag from the sponsor and flowers. Where to put them? On the ground, or hand them to the podium girls (my choice)? Sunday Night Cadel sat the “Esta The” Stuffed animal on the ground and the podium girl had to put it back in his hand. They want the pic of the pink jersey holder with that in his hand.

B. The riders are wearing hats that are crucial to the sponsors for TV time. The girls are trying to get the hats from their heads but the riders are on auto pilot and forget them.

Watching Universal Sports coverage of the Giro also got me pondering a few different things.

A. I understand the half hour coverage of the Avalanche series. The half hour is a good time filler. The issue is–How is the coverage of an event that is so freaking cool and exciting so boring? I didn’t know you could take an event as cool this and make it clinical. Verging on boring.

2. UTI. Really?? The Universal Technical Institute chooses to call themselves UTI? Really? Did they consult with NO-ONE? Are there really that many guys over there that UTI seemed like a good idea? I have to believe that if there was one woman on the committee to approve that acronym it would have been vetoed. The video’s for UTI are not allowed to be embedded into blogs so click here and check em out. I’m not kidding they actually call themselves UTI. Sorry just a little amazed.

Tres. Does Steve Schlanger have to call Todd Gogulski Go-Go?

While we are on the topic of Italia. Check out this cool concept Velo friendly hotel that Cuz Chris forwarded over. Heck it’s not Velo friendly, it’s Velo ONLY! It is perched on the edge of a cliff overlooking Lake Garda in Italy. If they build it I’m there. Check it out HERE

I wonder if you could request a Molson instead of Champagne? Remember UTI is THE Answer.