Sometimes it just writes itself 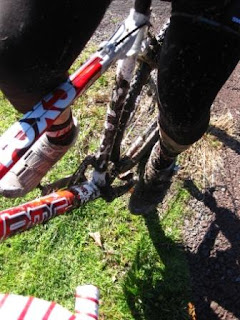 The Slop of cyclocross almost showed its face yesterday.  I am going to stick to my self imposed rule of not giving a blow by blow description of my mid pack C race finish but I would like to share this with you. 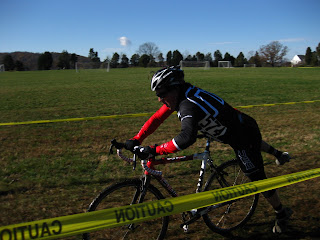 Now this is more than just a picture of my superman like remount and face of pain.  Looking closer you can see that I may indeed be part Unicorn. 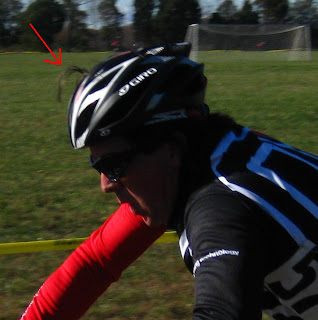 Dave sent me this piece.  It is in a word Simplyfreakinginglyawesomeunbelievablemindblowing in a sort of HUH? kind of way.

The music can make you want to do really dangerous things to your computer but the video is ripe for comment.

I started off with… Hmm I think I just found my next 16 potential ex-wives.  But that seemed a little out of line so I was onto…… If they can do that on a bicycle I wonder….. That seemed even more out of line….. Then it was Hey I’ve seen that on a different website, but of course I never would have.

I think I’m left with either WOW! or WHY?

Thad commented on Wednesday’s post that he had done a race in a Bacon costume.  Since I have a firm belief that Bacon is the first food group I requested a pic.  Thad must have been busy being rad impersonating bacon so I cyberstalked him and found these pic’s. 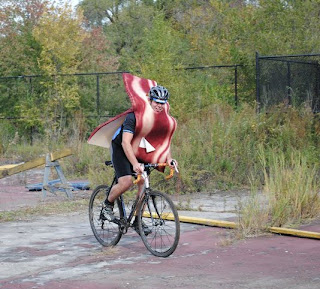 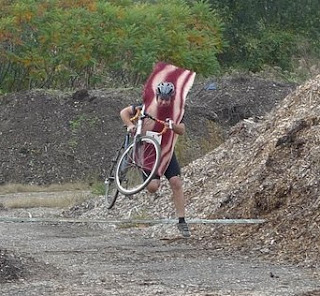 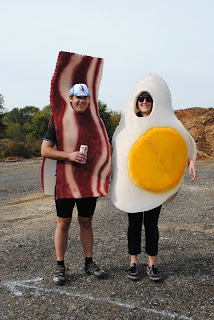 Not something I am generally prone to say about another man but “Dang he looks tasty”   Well Played Thad.

Now Taylor Knows how to Throw Down in a Cross race Bozeman style. 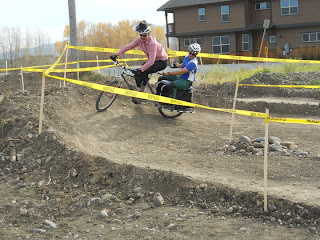 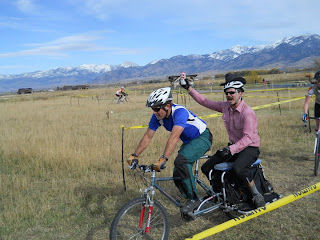 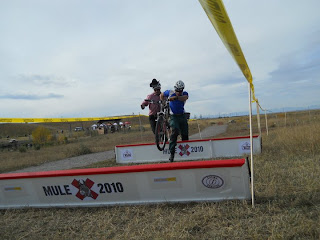 The Xtracycle people should be beaming with pride, and Taylor is overflowing with radicalness.

Taylor, looking forward to seeing you next week for some pedalling exploits.

Now that I have added a small dose of levity to the day I would like to bring everyones party down just a bit.

This issue was brought to my attention by following the Twitter exploits of the self professed Angryasian James Huang the Technical (Gear) Editor at Cyclingnews.com.

HERE is some background.   Please go read the article and come back I’ll wait…

Thanks for coming back.

Martin Joel Erzinger ran doctor Steven Milo off the road and then left the scene of the accident. Erzinger is a wealthy portfolio manger in the Vail area of Colorado. His Lawyer is trying to get the hit and run charge dropped from a felony to a misdemeanor. His lawyer states in the article from the Vail Daily that “Felony convictions have some pretty serious job implications for someone in Mr. Erzinger’s profession, and that entered into it,” WHAT? So by this logic the financial managers job is worth more than a human life?

The article starts with the sentence. “A financial manager for wealthy clients will not face felony charges for a hit-and-run because it could jeopardize his job, prosecutors said Thursday”

Here are a few thoughts on this situation.

Apparently a man who manages peoples wealth is more important to society than a doctor.

One manages peoples finances one saves peoples lives.  Which do you value more?  Money or Health?

Or an automobile driver is more important than a cyclists life.

Or I guess it is OK to strike another human being and flee the scene of an accident.

This case has me so confused and angered it’s ridiculous.  I’ve been hit by automobiles, in case you were wondering: It sucks.  The human body aboard a bicycle is no match for 2,000 pounds of steel.  The altercation usually leaves the human body way worse off.

The fact that he was caught loading the broken pieces of his new Mercedes into his trunk after he called to report an accident and left a human being bleeding in a ditch makes me absolutely crazy.  I have a feeling that when the market dropped dramatically he gave much more care to making sure his clients money was in the right place and he was collecting his fee’s.

I understand accidents happen.  What I don’t understand is not stopping and helping a human being who is injured.  I don’t understand even more that someone would not stop and help a human being that THEY just injured.
This behavior is exactly why a Felony conviction is in order.  Frankly the fact that the person (Erzinger in this case) will lose his job shouldn’t make a damn bit of difference.  If Mr. Erzinger has such a blatant disregard for human life he should be off the streets.

If you aren’t angered by this I think you are not paying attention.  Wealth should never buy you out of your responsibilities to the human race.

James (I have a problem referring to him as the angryasian) started THIS Facebook page to raise awareness.  Click over and “Like” it.  It is titled We’re People on Bikes, Not Lifeless Obstacles in Your Way.

James outcry to the cycling world has made it so that if you Google ‘erzinger hurlbert’ you will receive almost 2,500 returns.

On that note go RIDE, but ride safely, I’d like you to be back here for the Wednesday Quote.