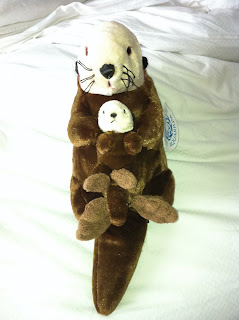 I could actually hear the Sea Otter’s at night walking around, or that was the ringing in my ears from leaving the Crown.

An impromptu trip to Sea Otter was well worth it.  I got to see many of my cycling alum friends in a much more relaxed atmosphere than Interbike.  Not having solid work duties was refreshing and allowed me to wander the pit’s be social and even ride a bit.

I rolled down to Monterey with Jeff Lenosky and Kyle Ebbet.  The two of them had been building a track for a new contest at Sea Otter.  The Speed and Style course.  This took the place of the Dual Stunt competition.  A combination of Dirt Jump and a Pump Track.

Upon getting to the venue I was immediately put into hard labor…NOT!  Lee of Leelikesbikes and Kyle along with various other volunteers had already been hard at work on the dirt.  Jeff was tasked with building the wood sections of the course.  I was tasked with the super difficult job of taping off the ramps to delineate the black and red courses. 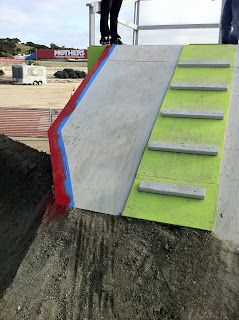 I had overspray on the black course so Kyle took over for me on painting.  Jeez what a novice I am. 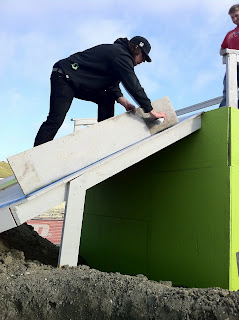 My years of roller skills were also put into use ensuring that the ramps were good and grey before people rode all over them.

The course was pretty cool.  The riders went down the start ramp hit the jump and could get a 1/2 second of bonus time for the better trick.  Then they did two laps of the pump track course.  Their time was from Jeff saying GO to the base of the ramp the second time.  The second time off the ramp could also garner 1/2 of a second bonus for the better style.

Here Danny Hart from Team Giant shows how it’s done in a practice run.  He is sans helmet so kiddies don’t try this at home.  Danny was fresh off a Pro GRT win, and the only person that I saw nail it on his first run.

In completely unrelated and random news I am happy to be in the world of Mac to be able to upload these iPhone movies, among countless other reasons.  Sorry for the sound on these.  the wind was blowing like crazy.

The finals of the Speed and Style contest were well received and I was able to watch from a good vantage point up high.  I got a few decent video’s but I am going to upload the one from Kyle Ebbett’s run.  Kyle dumps it but that’s not the real story.  The real story is that Kyle is a certified Honey Badger. That is to say that he is BAD ASS!

Kyle is barely four months out of brain surgery (seriously).  He had a tumor removed from his brain in late December and he is throwing down big air and living the dream.  To quote Randall, Kyle doesn’t “Give a S@&t”  He takes what he wants and what he wants is Big Air and to ride his bike.   Listen to the guy in the background on this video.  “You just got out of the hospital BUDDY”

Of course I also saw some other great bikes, hung out with friends and generally had fun.

After the competition Jeff’s Sponsors threw down with a big party to celebrate the 21st anniversary of Jeff’s 19th Birthday. 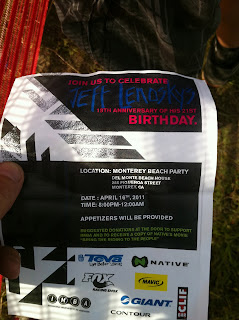 It was a rippin partay and Jeff sure knows how to give prop’s to his sponsors. 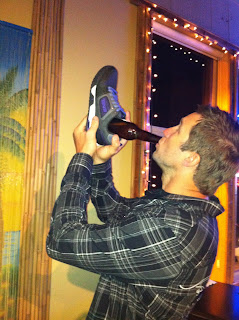 It’s at this moment that I need to put a HUGE Thank You out to Jeff and Kyle for dragging me around and helping a brother out.  Also my brother E.D.  You took such good care of me and hooked me up so much with rooms and rides and, well….

I’m often asked “What’s the coolest thing you saw” at these events.  Well with out a shadow of a doubt it would have to be this guy….

I didn’t pick that soundtrack, it was what was blaring over the PA system.  There were adults who were rolling this jump, and this little grom gapped it every time on 16″ wheels and did it time and time and time again for the 20 straight minutes I watched him.

The future of our sport is good if lil ones like this stay at it.

Of course no trip would be complete without Unicorn sightings. 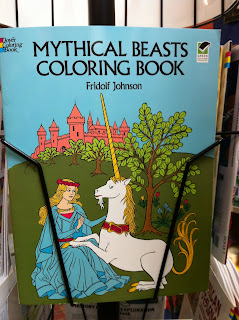 That’s it for now.  Time to go pack for Single Speed European Champs.  Gonna go hang with my man J-Fon and live the RoamLife.