Riding For The Rest of Us

Saturday was an arm warmer and knee warmer kind of day.  Perfect for a five hour ride.  3 hours in I had to stop and refuel.  I am not normally one to sit and eat a meal mid ride but it was so nice out and the tables outside were screaming my name.  I did and it was well worth it.

After my meal I was peacefully plodding down the road when a freight train screamed by on my left.  It was being engineered by Carrera Joe.  That skinny little man has quite an engine so I hopped on his wheel and took the express down the river.  After the river I bid him farewell and he dropped me like a bad habit.

Sunday I couldn’t force myself to get in the rain and pound out a few hours even though it was warmish.  So I took a trip to Trainerville.  It wasn’t the same but still kept the legs spinning.  Since Leesburg is five weeks away I need to keep steady miles on the legs, and butt.

The rain did not stop Tim Johnson and the boys on their ride from Boston to Washington D.C. to raise money for Bikes Belong.  They are ending on Tuesday at the start of the National Bike Summit.  This is an event I have attended before and will attend again this week.  We will learn about funds that are available to help fund cycling and transportation initiatives and then we will go lobby our Congressman and Senators.  Yes we are literally lobbyists on Capitol Hill.

This method works.  Many people from the bicycle industry and advocacy groups have secured Billions (with a B) of dollars to ensure that we have places to ride.

Tim Johnson and Richard Fries hatched this plan to ride into the summit and raise funds.  It was a last minute thing and has been highly successful.  They have raised over $25,000 so far on PledgeReg.  Richard explains that for every dollar Bikes Belong raises they can turn it into $1,800. 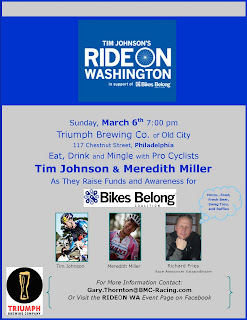 Richard called me last week and said that he would be rolling through town and asked if I could find him a place to have a reception.  We could meet the riders raise a glass and have dinner with them.  I was like…. “A Party?  HELLZ YEAH I’m in”   So I contacted the good folks at  Triumph Brewery in Old City Philadelphia.  They were generous enough to donate a meeting space.  I had a flyer whipped up (Thanks LRHG) a facebook invite was created and Voila!  Insta Party.

We got 50ish people to come out in the pouring rain and hang out.  Matt from Liberty Sports Magazine, Dan from Specialized, Gary from BMC (That’s me), and a few other folks donated items.  We were able to sell well over $200 in raffle tickets which according to Richard Fries math will equal $360,000 in transportation funding.  Additionally people were so generous with donating items for raffle that everyone who bought a raffle ticket was able to walk out with something.  It might have been just a waterbottle but everyone got something.

Here are some pic’s from last night.

Thank you to all that came out.   I will do some tweeting from the event.  You can see my Twitter account at the bottom of the page here or play along at http://twitter.com/velorambling.

See you on Wednesday for the quote.