The ride started off and the tone was set for the day.  We rolled out a few miles down a beautiful river road and missed the turn for the first climb of the day.  This would not be the last time we missed a turn.  We are definitely not orienteers.

The route was impressive.  We quickly crossed over from New Hampshire to Vermont where we would spend most of the day.   The loop turned out to be a touch over 120 miles without a single stoplight.   Take that in for a second.  120 miles and no stoplight’s.

Our group quickly started sorting itself out.  Jed and Tom established themselves as the strongest on the day.  They were setting the pace and the rest of us were following.  Brian was hanging tough, William, Steven, and myself were taking turns pulling the caboose.  I know myself and that I could get through this but wanted to not push to hard at the beginning of the ride.   As the day wore on it would get tougher for all of us but much harder for William and Steven.

It was towards the first rest stop that things started really clicking.  We were on a rolling section of dirt road and amongst a large group of teams going at a pretty good clip.  I had gapped off on the climb but was railing back on the dirt road descent.  Not really taking chances but moving. And then it happened.  I flatted.  A good sized sidewall cut was in my Hutchinson Intensive Road Tubeless rear tire.

This was not the tires fault, I blame the large rock that jumped in my way.  I hopped off and started changing the flat.  No big deal I have done this hundreds if not thousands of times.  I type that but it isn’t as easy to change the flat when when your heart is beating out of your chest, you are literally dripping with sweat and you are breaking the bead on Road Tubeless wheels.  OH… and add to that stress the fine cameramen that shot the above video stuffing a camera in your face.

Suddenly it was like I had never changed a flat in my life.  First I tried a CO2 to see if the Stan’s would do it’s job.  Try as it might the hole was too large even for the magic sealant to do its job.  I had to go old school on this fix.  A tube was put into the tire and I folded up a dollar bill to patch the tire.  I figured this was my chance to make the above film.  I held up the dollar and said to the camera “This will be the best dollar I spend all day”  Watching the coverage my wisdom clearly didn’t make the cut. They probably couldn’t get past the several minutes before that of me fumfering around.

I caught on to the group after ward but on the way also managed to eject one of my water bottles.  So much for my plan of using Alloy Elite cages.  Luckily the velcro strap holding the bottle to my seat tube  worked and did it’s job. The first rest stop / country store was a welcome site.

We got rolling again and were riding pretty well as a group but still managed to get lost a few times.  After one ripping downhill Jed and I sat an an intersection looking at each other.  Clearly not knowing where to go. 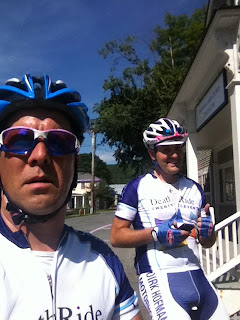 Tom wasn’t too sure either. 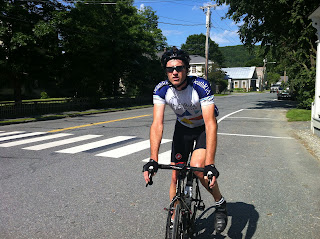 Finally we made it to the halfway point.  There were lots of teams there having lunch and chilling out.  The sleepy Vermont town that we invaded wasn’t quite sure to make of all these people hanging around in their underwear on curly bar bikes.  They were awful  nice though and made a mean sandwich. 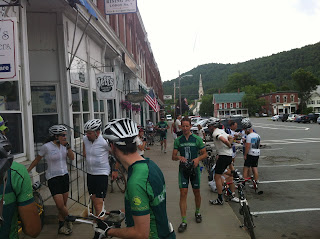 Right after this stop is where things started to get tough for out team.  We promptly rolled out into a big hill that turned into dirt.  The riding was amazing but Steven was starting to crack.  It wasn’t his day.  He was fighting through it like a trooper but hill after hill it was kicking him in the man bits.

William was suffering through here as well. He was riding a standard crank while the rest of us were on compacts.  Grinding through these climbs was taking a toll on his knees and if I ventured a guess his psyche.  Its hard work slogging up the hills instead of spinning up them.  To his credit he was always right there but MAN was he working hard for it.

Brian started to fade a little.  But after a mechanical right as it started to rain (rain?  I think they call this foreshadowing) and a quick ride in the support van to fix it he was back.  After his mishap he was back to rock star status.

Jed and Tom continued to ride at the front strong like Bulls!   Frankly I think they were questioning riding with us.

I was holding steady.  Not at the back not at the front.  My back was holding up and my tortoise approach was working.  There was plenty in the tank to finish and even start to ramp it up a little.  Unfortunately Mother Nature had other plans for us.

After a long downhill section we turned into a nice gradual uphill section and got to a T in the road.  We weren’t sure where to go.  Straight or take the turn.  Jed was back with Brian getting him in the van.  We didn’t know this.  So we stopped to wait.

At this moment Two of the Lehigh Valley’s finest Beth and Kate blew past us to snag the days QOM.  Unfortunately they went the wrong way.  Shortly after the rest of their team rolled up and we hung out for a few.  It was at this intersection that the skies completely opened up.  It was raining to the point that little creeks were forming in the dirt road.

The girls had a similar experience to ours and eloquently wrote about it on the RAPHA blog.  Their account can be found here.  For the record Kate descended to the bottom, re-climbed the entire section and won the days QOM.  She is that bad ass.

Our spirits were not good here.  We freezing and shivering when Jed rolled up and told us Brian was done.  Our hopes of finishing as a team were gone.  We took the correct turn for a change and climbed in the rain and hail.  It was harder than some singletrack climbs I’ve done.  At the top we regrouped and waited for a while.  Steven had cracked.

After the regroup we descended and took the most painful wrong turn of the day.  A few miles of sweeping fast dirt downhill that we only realized was wrong when the support vehicle chased us down and told us.  The positive part was that Brian got out of the van with a fixed bicycle and was ready to ride.  The negative part was that Steven took his spot and called it a day.  His body had had enough.  William contemplated getting in but didn’t.  He fought threw for the rest of the day but he was running on fumes.  His knees probably still hate him.

Finally we were back on track.  We rode to the last “rest” spot-general store and it had stopped raining. But was threatening to start again.  We were trying to rush to get to the last section of dirt road and the finish when Derrick from RAPHA walked over and told us our day was over.  He didn’t think we could make it back in time.  He pointed us back on the road.  We were dejected but resigned to finish.

We started down the road and the sky tore open again.  The rain was coming down hard, cold, and fast.   the group was riding paceline to try to get back as soon as possible.  That meant we couldn’t see from the spray.  At this point it somehow started to rain even harder.  The road was completely under water and our confidence was shaken. At this point I started to sing the opening chorus to this.

It seemed only logical.

We pulled over to get directions and Tom got possibly the best shot of the day with his phone.

It was at this time we started to try to rent an ark.  And then…. The rain just stopped.  It took us by surprise but we were grateful.  Back on the road and with the exception of one more flat we made it back in beautiful sunny weather.  Just like the day began.

I guess I am a reasonably typical neanderthal guy.  There has been lots of introspection as to why this post took me so long to write.  I had a great time.  We partied down that night and forged some great friendships.  But something was still nagging me.

Finally, months later it dawned on me.  I don’t want anyone to think that I was giving our group or anyone on it a hard time.  We all rode strong and persevered through as best we could.  I would tend to think we all learned something about ourselves.  Also we learned that if we are to bite something off as a team again, we actually have to ride as a team prior.

Thank you Jed, Tom, Steven, William, Brian, Rapha, and everyone else we encountered on the road.  I have stories for a lifetime and am looking forward at another crack at completing one of these fine rides.