Yesterday I looked at a friends blog and I happened to glance to the left at the “blog roll” of people he follows.  Under my blogs name it said it had been four weeks since I updated the site.  4 weeks?  Really?  That is odd to me because I am often writing posts in my head.  Guess the follow through has been lacking.

Even more puzzling to me is looking back at the calendar and I see 8 weeks.  8 weeks since I rode the Rapha North East Gentlemen’s race, and didn’t write about it.  Again, puzzling since I know I have written this many times…… In my head.

Lets play catch up and start with the Rapha ride.  It’s as good as any place to start and was a fantastic day on the bike if even a bit disappointing.

The seven plus hour drive up with driving rain storms should have been some indication of how the day was going to go.  No worries I was in for the long haul.  After many hours I got to Connecticut and picked up Jed.  We were anxious to get to New Hampshire but still had three hours or so to go.  A well placed road side Chipotle fueled our drive.  It did confuse us with this sign though.

We were happily rolling along and making our way.  Telling lies, listening to music, and having a good old time.  Out of the blue Jed exclaims OH SHIT!   This wasn’t any ordinary bout of cursing.  Jed had forgot the beer.

This is a bit of an issue all by itself, but even more of an issue when a case of beer was part of the entry into the race.  It was after 8:00 at night and we were starting at 7 something the next morning.  We took a detour to Brattleboro to try to find a case of beer that wasn’t cheap domestic swill.  Not that we are against drinking such brew but we didn’t feel it appropriate to “pay” with it.  We found a spot and I determined that Brattleboro is a place I want to go back to and check out.

So back on the road and I got to listen to Jed moan for the next hour how he had picked out a custom case of 24 separate beers from New Jersey and Pennsylvania to represent.  I do believe I said “Oh WHAHHH you have a nice case to drink when you get back”.  Come to think of it he didn’t share either.  Jerk.

Upon arriving in New Hampshire and checking in to our room for the night we met Beth Strickland in the hallway.  She had a similar tale of getting there, and informed us that all members of the Lehigh Valley crew were already in “proper form” and in bed.  She may have called them wimps or something along those lines.  It didn’t stop them the next day.  They are profhessianals (copyright Stevil)

For the first time that I finally met two of the teammates for the next day.  By “meet” I mean I walked into their pitch black room and said hello to Brian and Steven.  They were already asleep.  Lets back track for a second here.  The Rapha Gentlemen’s Race is ridden in groups of six.  You have to start and finish together to be scored.  This is a task for a group of riding buddies, or a team.  For a group of people that  have never ridden together it is a task.  It proved to be an insurmountable one for us.  After convincing Jed that I really didn’t want to snuggle it was off to bed.

We got up early and wedged a bunch of groceries into our faces that we didn’t want.  Then we went back for seconds.  This was to be a day of over 120 miles and 13,000 feet of climbing most of the climbing on dirt roads.  Breakfast was essential.  The boys from Kapelmuur Independent were next to us quietly crushing groceries.  Beth and Kate were there as well.  I finally got to meet Steve and Brian face to face.  It wouldn’t be until the start that I met Tom and Bill.

Jed to get his stuff for the day.  We had a long… too long….. conversation about whether to get changed at the hotel or start.  We decided at the start to minimize chamois time.  Then Jed comes out like this.

I knew we were off to a good start.  He wore the helmet all the way to the start, practicing safe passenging.   Although to be fair he did take it off once to adjust the fit.

The day required a soundtrack to be rattling around in my head.  I decided it would be old school. 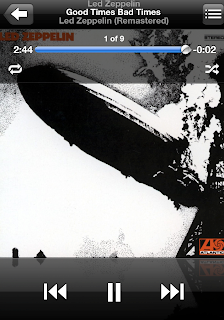 Finally it was time to meet everyone.  Jed had ridden with these folks before.  He was the catalyst for getting everyone together.  We just hadn’t all ridden together.  This proved to be a challenge.

Derrick from Rapha was kind enough to snap our picture before take off. 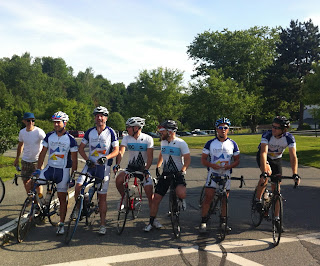 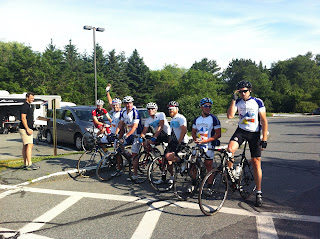 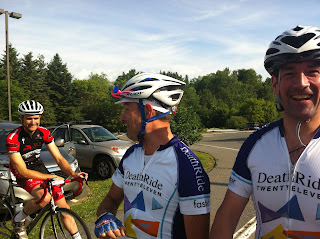 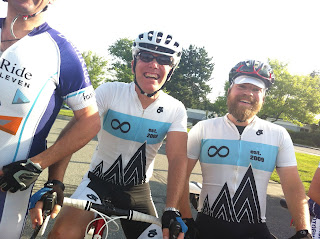 Next installment The actual ride.  NO, it wont take 8 more weeks.  I hope.