No Beer For You 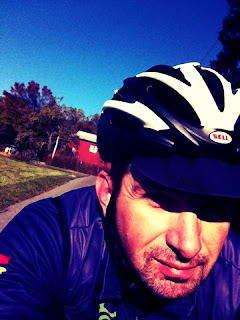 For those of you who grew tired of me promoting my contest to benefit the YSC a few weeks back; Bite me.  For those of you who donated to the cause.  Thank You very much.  We raised almost $300 and Dave won a swanky new helmet that he was good enough to provide a picture of.

Dave also sported that helmet at the Bear Creek Cyclocross races this weekend.

Man I RULE at seque’s.

The Bear Creek races were moved from Bear Creek to the site of 5th Street cross, The formerly coolest race in the history of ever.  The course was fast, fun, and muddy.  Even thought it hadn’t rained in several day’s the frost and dramatically changing temperatures made sections mucky and slick as greased owl snot.

I had my best races of the season and really felt like I was giving it.  My leg’s sure barked at me Monday to tell me I pedaled.  Possibly the best part of my races was that my mom went to Rome and brought me back a hat.  I wore it proudly in all of it’s color clashing glory against my kit.  Hope Auer doesn’t fine me for a uniform violation.  Best part of the hat, It says ROMEO on the brim.  Yeah that’s how I roll.

The USA Cycling and UCI official’s in the region have taken a hard line against unauthorized feed’s, AKA Beer Handup’s.  They have really singled out the Lehigh Valley crew.  It has gotten to the point where they announced at our 10:00 start time for the C race (and every race there after) that any one taking an illegal feed or a beer would be Disqualified.
I get that illegal feeds are a rule; but seriously?  Cant we all just lighten the hell up?
Since the officials were so serious the normally fun crew up in Emmaus decided to back off and not cause a disruption.  They didn’t want to get anyone in trouble. Most of all decided that they could go home and have an adult beverage in the privacy of their own home’s and not party with a few hundred of their closest and new friends.
If they had decided to party at the race it MAY have looked like this…
It possibly even could have looked like this…
Too bad it never happened.  That was just Saturday not happening.  I heard Sunday would have gotten even more ridiculous but that never happened either.  It didn’t happen to the extent that their aren’t any video mock-up’s about it.  At least not that anyone is sharing.
Man I am digging cyclocross.  It kinda feels like home.  You know the home where you pull on your snuggie, curl up on the sofa and watch Mad Max on repeat all day.