*** This was supposed to be uploaded Last Friday but earning a living got in the way as I was in Las Vegas at Interbike.  Charm City has happened since and I will have pic’s and words following shortly.***
The solid week of rain the week before the races ensured that what is usually a very fast dry race wasn’t to be.  The ground was wet but there were several areas of standing water and one very long mud bog.
Mike Yozell is a local cross legend and all around fast guy.  Besides just being fast he design’s a hell of a course and this one didn’t disappoint.  He couldn’t do any thing about the weather and being the Flahute that he is he dealt with and reveled in it.  Everyone I spoke to had good thing’s to say about the course.  By the way he pulled top 10 placing’s both days against a stacked masters field.
***Note***  Mike was not the only one working on the course there were many of the dedicated Tifosi from the Emmaus/Bicycling/Lehigh Valley crew helping.  More on this collective group of fanatic’s later. 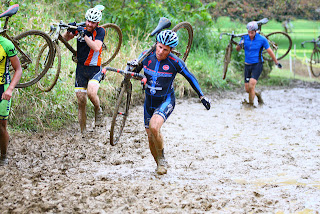 Both day’s I held up my end of the bargain.  I finished mid pack and had fun.
Quote of the weekend.  As I rode past the LRHG and smiled for a pic.  “Don’t smile at me, RACE!!!!!”  That girl is smart. 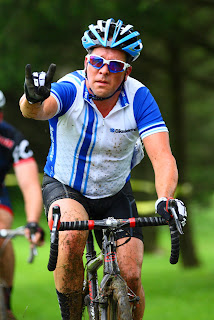 The second day I was “racing” 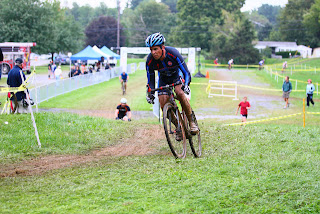 Then I saw Anthony and couldn’t help myself. 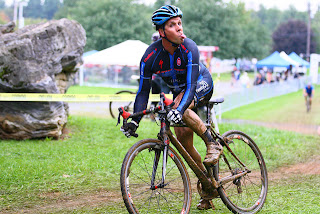 The crew of people that is in the Emmaus area as a whole are fantastic.  As someone who drop’s in occasionally to partake in the festivities and shenanigans I always’s walk away jealous.  Jealous of the great time’s they have, the camaraderie, and the fun.  These are my kind of cyclist’s.  They love the bicycle, they live the lifestyle, and if I could collectively ask all of them to go to the Sadie Hawkin’s dance I would.
This fun may best be described by investing 20 some odd seconds of your life to watch this…
That is people having fun in case you are unfamiliar.
As is this…
If you don’t know you should.
*** Stuff I forgot***

The folk’s at Nittany doing Beer handup’s got a stern talking to from the UCI official’s for doing “illegal feed’s” during the race.  I guess their job is to follow the rules not have fun.

To counter the UCI I tried do a few true “Hand-Down’s” Stevil Kinevil style.   I loaded a few dollar bill’s into the newly acquired sausage casing AKA Skinsuit and handed them out to some spectator’s.  As a whole they were generally confused.

It kept me entertained and one of the guy’s ran back out on course and re-handed the bill over to me.  Could that be considered a hand-up or just simply returning someone else’s property?

I sure hope the UCI doesn’t fine me.