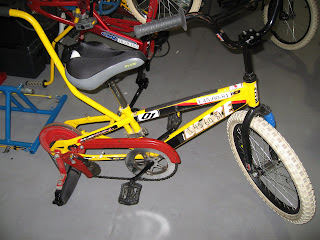 Well… Last week this crazy looking bicycle made me break my golden rule and I ran even though I wasn’t being chased.  In fact I was the one doing the chasing.  I was chasing an energetic happy go lucky kid.
If you read this here exercise in narcissism you know that I volunteered for an organization called Lose the Training Wheels.  I along with my eldest daughter was helping teach a boy ride a two wheeler.  Scroll down to last Wednesday’s post and get caught up if you care.
I am happy to say that we did it!  We got that boy to ride a bike.  It was one of the most liberating things I have been a part of in a long time.
The process is that you get the child used to pedalling by riding one of the “Roller Bikes” shown above.  Once they get that down they progressively get switched onto more tapered rollers so that they rock onto the side and get the sensation of turning.  Once they have the hang of that one of the instructors takes the child for a ride on a specially designed tandem. 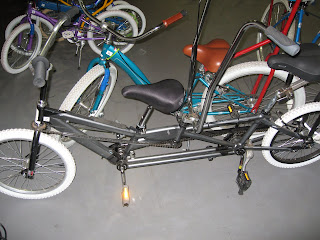 This tandem can be steered from the back.  Note the chain and gear assembly from the front fork to the rear handlebar.  This allows the child to steer but also allows the instructor to correct the steering.  When the boy we were helping got on the tandem on Wednesday I must admit I was tired.  I was sweating through a t-shirt, shorts, and socks every session.   I do believe you could say I was sweating like a prostitute in church.
The child could ride and I knew it but his disability  made it almost impossible to concentrate for any period of time.  He would do great and then forget to steer, or pedal or both, or look up at all.  So as well as being physically tired I was mentally getting exhausted.  I do believe my daughter was at the same point.  Then he came around the gym on the front of that tandem and for the very first time I saw his face.  That smile almost brought me to my knees.
I had only seen his back.  Running behind him offering constant encouragement, real and hidden in commands I wanted him to follow.  Good job looking up (he wasn’t looking up), your doing great (he was) Great fall (Golly that looks like it hurt) and so it went for an hour and a half.  But back to that smile, he was having fun.  Truly having fun.  The mental exhaustion left immediately.  I wanted to run behind him and shout encouragement again.
Thursday we got him on two wheels.   First the instructor ran behind him to make sure he was safe.  When he got up and started riding I cant lie tears welled up in my eyes.  I only got a small glimpse into this child’s life but this was big time.  I looked next to me and my daughter was doing the same,  We had a great hug, and then learned how to follow him correctly.  The time flew from there.
We were doing “Drunken Sailor” loops around the inside of the gym.  I ran more and harder that day then I have in the last decade combined.  I can ride a century a weekend… but running?  I never stopped because all I could remember was his smile.
Friday we went outside and rode laps around the tennis courts.  The change of venue threw him a bit, but it was also more natural and he took to it.  From the very beginning he would start off riding by saying “OK Lets Go”  It became our starting phrase and I cant stop saying it still.  We also did many laps singing Twinkle Twinkle Little Star, and the ABC song because it seemed to focus him a bit.  But Friday we got a new one.
Part of following the children is not to micro mange their effort.  Allow them to weave and totter.  This let’s them recover and gain a sense of balance.  Occasionally actually let them crash but try to minimize it by using the handle.  So Friday doing laps around the tennis court he was doing great.  He took one turn a little close to the fence and clipped it with his bar.  I was able to minimize it and he barely got off the seat.  I reassured him and told him it was a great crash.  He hopped back on the bike but this time after “Ok Lets Go” he added (more to himself) NO FENCE!  we had many more laps of “OK Lets Go No Fence”
When we were finished for the day there was an awards ceremony.  The children received certificates and medals with their names engraved in them.  They were so excited.  It was simply amazing.
He had two other brothers in the class with him.  As I mentioned previously these children’s parents were saints.  Really patient caring people.  The mom cooked us all brownies, and zucchini bread muffins.  The muffins were so good I ate two.  I got each of the boy’s a book.  Freddy the Frog Rides a Bike, The Berenstein Bears The Bike Lesson, and Curious George Rides a Bike (one of my all time favorites)  My hope is that reading these with their parents will help to make these children lifelong cyclists.  It was as if I had given these kid’s gold.  They were so excited.
I would be remiss if I didn’t give HUGE shout outs to the instructors and coordinators.  They work their tails off.  It is definitely rewarding, but challenging, and these folks aren’t gonna get rich doing this.
That last bit said…. I am certainly going to be hitting some of you shop owners up to help out next time they are in town.  They need the assistance, and it’s not why you do it but I would almost insure that you would sell some bicycles as well.
I also have the wheels turning to see how I can tap some of my industry contacts to get these people some support.  A t the very least product.  As you can imagine raising a developmentally challenged child aint cheap.  The program donates bicycles to some of these families.  There has to be a way to get them some bicycles.  So if you are in a position to help and are reading this, please reach out to me.
I didn’t take any pictures of the boy I was helping in order to allow him his anonymity, but man I wish I could end this post with a picture of his smile.  It would shine right off of your computer screen.
Until Wednesday Keep the rubber side down, and be glad that you can ride a two wheeler.