I started this exercise in narcissism talking about PASSION. Specifically PASSION for the bicycle industry. This post is about someone who exemplifies this PASSION. Jay Dejesus. Call him Jay Da JESUS he loves that.

I started thinking about Jay when I was going through my archive of bicycle stuff, seeing if I could thin the herd. I was basically unsuccessful, but I did find these EWR brochures from 1992. 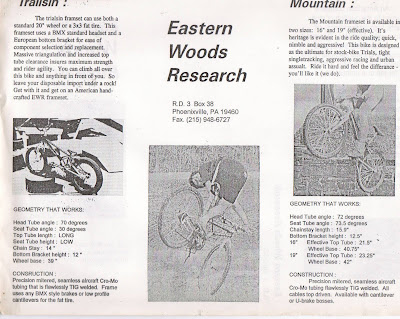 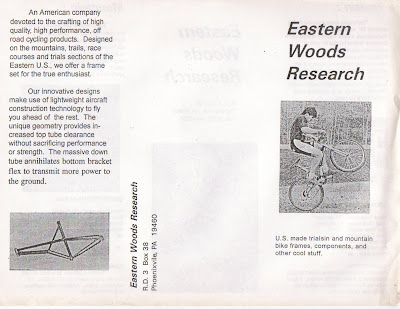 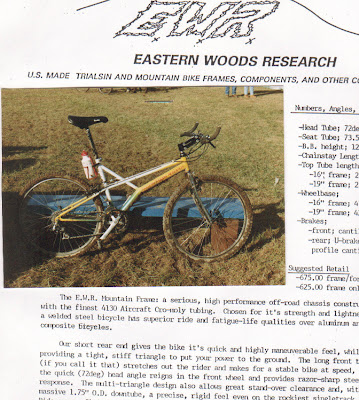 This is a printed sheet of paper with a Photo stapled to it, so is the next one. 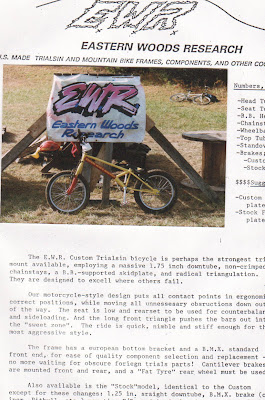 I COVETED this trials bike back in the day.

EWR, Eastern Woods Research was then, and has risen like a phoenix from the ashes to be a very cool bicycle company based out of that hotbed of cycling I like to call the Lehigh Valley. Jay resurrected the brand a few years ago and is doing pretty darn OK with it. The reason Jay is doing ok with it is because he is the embodiment of the PASSION in the bicycle industry.

I met Jay 17 years ago while I was working at the now defunct T-Town Cycles in Trexlertown. Jay had this bicycle company and was a rider; how freakin cool. I got to know Jay from hanging at the shop. He used to go out back and ride his trials bike into the deep ravine of the creek bed and then hop it back out. I rode remedial trials and was flummoxed as to how the hell he could do that.

Fast forward 10ish or so years and I run into Jay again through my riding buddy BBB. We ride again and he still has the PASSION. He has progressed through trials to being an all around rider, as I hope I have as well. Jay taught me how to carry speed through corners; going against my instincts and weighting the front end of the bike not just sitting on the rear. It was a revelation.

He has that knack. The ability to describe things to people. I usually learn from watching, when people ask me how I do something I usually fumfer around and say something along the lines of “I don’t know I just do it”. Jay has the ability to pass on his skills to other. I on the other hand strive to have skills.

Random Fact: Thinking about the ability to teach others how to do things on a bicycle got me thinking of Jeff Lenosky. Jeff is very good at helping people’s skills progress. EWR was Jeff’s first bike sponsor. Jay and Jeff went to school together at East Stroudsburg University. I have heard many stories of the shenanigans that went on up there from Jay, Jeff, and even Jorge. I will just leave it at that for now because Jay and Jeff are bigger than me and well Jorge isn’t.
****Correction****
This is from Jay himself.
“I do have a correction for you, if you could. Jeff and I trained together around East Stroudsburg. Jeff went there, I went to PSU. I did sponsor him, and he won his first Pro NORBA Trials title on a bike I made for him with a BB I accidentally welded in backwards!”
Thanks for reading Jay. 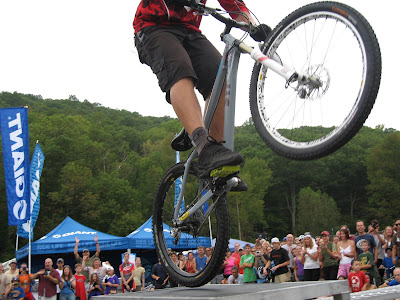 Back to the original story.

Jay relaunched EWR a few years ago and it has taken off . In my opinion there are a few reasons it has done so well.

First: JAY! The dude is just fun to be around. His energy is infectious. His setup at the MASS races is the biggest and one of the most electric to be around.

Second: The product is good. The bikes ride nice and they are designed to handle the roots and rocks we like to call the Mid Atlantic.

Third: People like to have a place to gather and belong. Why not gather where there is mutual PASSION. At the EWR tent!

Jay didn’t ask me to write this, has no idea I am writing this, and I hope he doesn’t smash me for writing this. Oh, and Jay if you are reading this I can still out-soapbox you!

I guess what I am trying to say is I KNOW JAY! You should too. 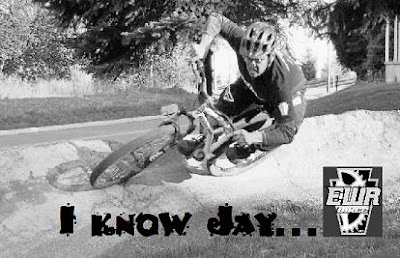