Martin Enzinger the wealthy hedge fund manager has avoided jail time and any real penalty. The major thing quoted was that this would impede his ability to make a living. This is despicable! because he is wealthy his job has something to do with his sentencing? If a landscaper did the same thing on his way home would he get off with a slap on the wrist? I’m guessing not.
It is irrelevant if Erzinger ran down a landscaper, a baker, candlestick maker or anyone else on his way home. The fact is he ran down a HUMAN BEING and left him in a ditch. No idea what condition this HUMAN BEING was in and very possibly dead. But Erzinger (I’ve tried to type Mr. Erzinger several times and cant) left a doctor on the side of the road.

Many people think of the privileged people in society as the rich, Doctors and Lawyers. Here all three of these elements come together. Many people think all of these people are wealthy. I know quite a few Doctors and Lawyers not all of them are wealthy. The drama plays out in the courtroom and it comes to a head with someone who protects peoples lives versus someone who protects peoples money. It turns out in Eagle County District Judge Frederick Gannett’s courtroom that the almighty dollar rules. The part I found compelling out of THIS article was this one

“The badly injured cyclist, Dr. Steven Milo of New York, urged the judge to throw out the plea deal. His attorney stressed that Erzinger fled the accident scene, hiding his car behind an abandoned Pizza Hut and took repeated steps to “cover up and minimize his conduct.”

“This is an inappropriate plea bargain,” Milo’s attorney, Harold Haddon, argued during the plea hearing Thursday afternoon. He said that Erzinger never took responsibility for his crime”

This disregard for human (and Cyclists rights) is absolutely disgusting.
To backtrack to the beginning of the article Erzinger’s lawyer argued that Erzinger suffers from sleep apnea and this contributed to the accident. If this is the case he should not be allowed to drive because he is a hazard to himself and every driver near him. Perhaps if Erzinger is going to be roaming around free he could dig into his extensive wealth, do the correct thing and hire a driver.

This goes into the “If you aren’t outraged you aren’t paying attention” category.

Since it is officially as cold as witches left one in one of those ^ I have dug out and been using the whole gamut of cycling clothing.   Bib shorts for roller riding, short sleeve base layers for T’s on the rollers, sweatbands, hat’s and bandanna’s to stop the pouring of sweat into my eyes.  Then every possible long sleeve warm thing I own to ride outside, thermal tights, thermal jackets, helmet liners, balaclavas, mountain expedition gloves, etc….

On the mountain bike I have been able to stay warm but the wind on the road chills me to my brass bra.  Yesterday I made the mistake of trying on the Assos Fugu Jacket. 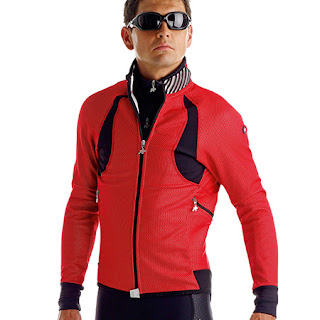 I only say mistake because now I want one.  This thing is amazing.  Complete with an inner jacket lining that zips straight into a hood.  No more little hat slipping over the ears and the heat from your body would keep your noggin toasty warm.  The only limiting factor two weeks before or into the Chriamhanukwanzika season is the $650 price tag.  I am going to have to start saving the excess pocket lint and see if my friend the Hungarian Irishman will take a huge wad of pocket lint as payment.

I tried to stay away from mentioning just how freakin euro-cool Assos is but COME ON the stuff that they produce is uber-cool (as well as euro-cool) and functional as well as long lasting.  Anyone who puts the miles on the saddle would appreciate Assos clothing.

Since I may not be worthy of Assos cool and may actually bring down their “Cool Quotient” I have a plan to counteract that possible perception.

Yep Bar Mitts.  People may say they are goofy looking, hell they are probably right.  They definitely clash with the euro/uber-cool Assos Fugu jacket but they are equally as warm.  Everyone I know who owns these or has used them raves about them.  These go on my list of wants as well. I meant to pick up a pair at Interbike from the distributor but by the time I got back around he was gone.  I forgot about him until too late.  hard to focus on cold hands when its 100 in the desert.

So I would like a clashing Cool/Dorky outfit for the top half of my torso.  Feel free to chuckle through your chattering teeth.  I would be warm and to me that is Pretty Damn Cool!

Now I just have to get my feet warm.  Again I can generally deal on the mountain bike but even then the piggies tend to get a bit cold.  Maybe some Hotronic electric insoles? Possibly I will need to bring my Euro cred back up and look for some Sidi Toasters. Most likely what will happen is I will continue with chilly tootsies and use these, or the toe version.

This ONE had been going around a bit and if you haven’t read it you should devote a moment of your life to do so.  A nice tongue in cheek (I think) take on how NYC is becoming a “Bicycle Town”  To paraphrase Mr. Sinatra “If it can happen there it can happen anywhere”

Be safe out there, ride your bicycle, and bundle up if appropriate.