While J-Fon, Mike and I were driving to the Maredsous ( Say Mah-red-sue) Abbey we heard this annoying yet catchy earworm in the car.  After singing the chorus multiple times and having my life threatened by both of them I vowed to have the entire event singing the song.  I am proud to say that I was rather successful.  Even the singer for the Blind Horses got in on the action.  Even if only to quiet my loud voice down.
So onto race ride day.  We had to all line our bikes up on the side of a bike path and then stage a few meters away.  A reasonably typical Lemans start except for the interesting cast  of characters we were.
Probably one of the best parts of the race ride was when we were standing there and a woman rode through.  We cheered her on and she looked genuinely confused.  Then a group of three kids came riding through and all 300ish of us screamed and cheered for them as we parted and let them through.  These kids were amused and had a great time taking us all in.  It made me laugh very hard, and made me think what my kids would have done. I am sure they would have cracked up and had stories for day’s.
Well as the LeMans run walk started J-Fon and I decided that the only proper way to honor this distinguished occasion would be to skip.  Skipping in a crowd is difficult but ridiculously rewarding.  Try it some time.
There were about 10 (give or take) or so guys competing for the SSEC 2011 title.  They went off the front and the rest of us settled in like cattle to have a good ride.  By the time I got a little more than 1/2 way done the first loop the fast guys were already on the way back.  Of course we cheered them.
Le Dav had said to keep an eye out for him on the course because he would have beer.  Umm Ok!  So second time up the smaller of the two big hills we spotted Le Dav and come screeching to a halt for beer.
Every lap there after we stopped and visited with Le Dav.  One time I may or may not have stopped and danced to “Barbara Streisand” while singing the chorus.  This may or may not have happened.  You’ll never know unless you were there.  I can’t imagine a pasty white guy in bib shorts and cyclist tan lines dancing awkwardly would be very attractive to see so let’s hope it didn’t happen. 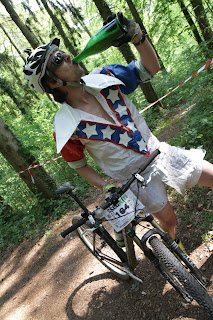 We agreed that Le Dav’s Moinette. 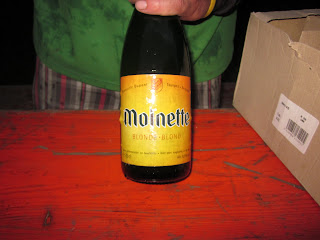 Was putting a WAY bigger hurt on us than the Jupiler’s at the Start/Finish line.  Perhaps that can explain this at the time logical decision…

After a few laps in hot garb J-Fon and I decided that we would ride in bibs for the rest of the race.  With a dude in dirty underpants…. 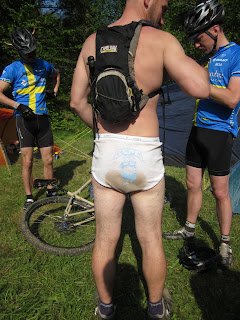 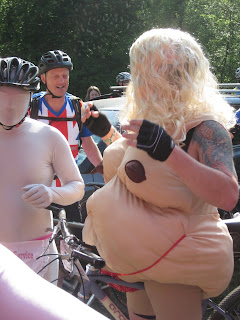 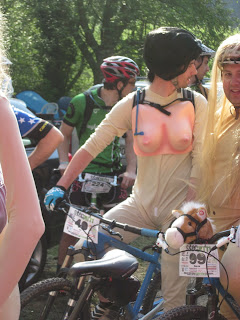 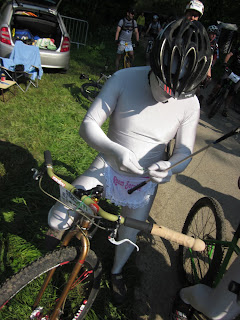 Riding in Bib’s didn’t seem like such an odd choice.

All in all I would say that Bruno, Emillien, and the entire SingleSpeed Belgique crew turned it up to 11.  Can the French match this for 2012?  I don’t know but I intend on finding out.
The My Life Behind Bars Facebook page has an album of pictures from the event.  You can click through from the box on the upper left.  Feel free to “Like” the page while you are there.
Barbara Streisand!