I just started using embrocation a few years ago.  I had heard of he magic effects of this warming cream and I am not a big fan of freezing so I decided to try it.

In general I like embrocation.  The thing is, no one ever taught me to use it and being a dude I never asked. How hard could it be?  Rub some cream on your legs, get warm ride, done.  Only it isn’t that easy.

The stories of people getting embrocation in their eyes, on their junk and even worse, in women’s lady bits are abundant and often great stories.  People always speak about the “after burn” or getting in the shower and having the stuff re-awaken.  I am not a fan of that.  It has been said by many that the after burn is just part of the process.  Part of the process I don’t like.

Because of these stories I have always treated embrocation like toxic waste. I am almost afraid of the stuff, even though I like to use it.  Last year I got smarter and started talking to people about their embro tip’s and even used this thing called Google my friend turned me on to and found out peoples tricks.

Here is my process. 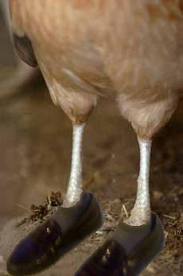 But before we get started I wanted to head off any Chicken Leg jokes that are sure to come my way.  I almost didn’t use pictures but it makes the story telling easier.

My embrocation of choice is Mad Alchemy.  The Uber Secret Coffee has a nice smell and a bit less burn than the standard medium. 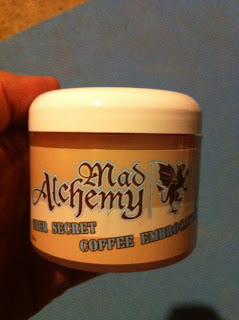 The capsicum can have a bit of a burn to it but, it has let me race cyclocross in just knee warmers all season. Some folks just use the embrocation but I have bad knees and don’t like exposing them to the cold air like that even if they feel warm.

Always put your shorts on prior to applying embrocation. Also pull your shorts up above where you normally put them. You don’t want to drag the stuff directly into your groin, Unless your into that kinda thing.  I like to put my socks on as well and roll them down so I don’t have to risk rubbing my forearms or jersey sleeves in the embro pulling my socks on.  Plus if its really cold I will rub the cream into the tops of my feet as well as my legs.

Probably the best trick I learned this year is to use a rubber glove to apply. 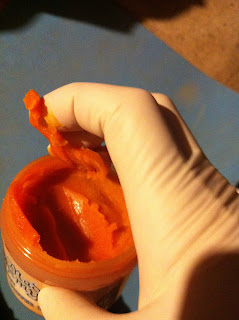 I get a fair amount on my fingertips and then drag it up my leg in a line. 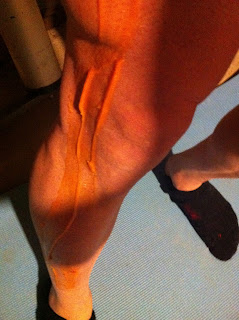 Then I rub it in on the front of the leg.  I don’t do the back of my leg because it doesn’t really see the wind and I am not a fan of the heat when the burn gets going behind the knee.

Then I pull up the socks, put the shorts in place and continue getting ready.  All the time I am getting ready I am cognizant of the cream and sure not to rub against it while putting on Knee warmers, tights or anything else for that matter.

The other trick I learned this year that has increased my enjoyment of embrocation is getting it off of my legs.  This way I can enjoy my shower without the water re-awakening the the cream and making my legs feel on fire.  Also then I am not afraid to do things like pull on my jeans after a race and be afraid that I am pulling a bunch of hot cream into my nether regions.

I had heard of people using hand sanitizer, moist towellettes, or alcohol pads.  None of this seemed to work really well for me.

My low tech approach is to take a bottle of rubbing alcohol. 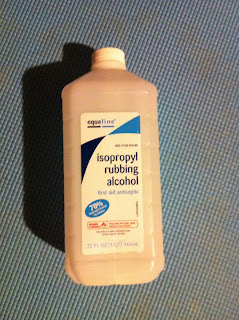 Then pour a bunch into a few paper towel’s.

Then wipe off your legs

I can still feel a twinge of heat sometimes after removing the Embro but nothing like full blown heat and the fire doesn’t turn on in the shower.
I keep all of this in a plastic shoe box storage thingy.
Last important note:  Don’t mistake your Embrocation for Chamois Cream.  Seriously I know people who have done it.