Down in the Living Room Moto Edition

I got a chance to check this beauty out the other night at a party.  This was a friends fathers and when they cleaned out the barn they had to lift it out with a hoist.  How they got it upstairs is still a mystery.  My guess is it had to something to do with a few can’s of Schlitz and some male bravado. 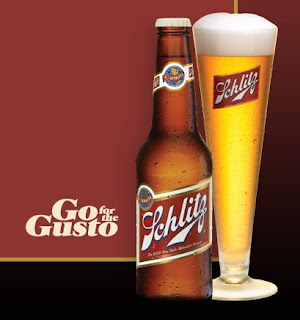 I was amazed how much bicycle technology this 1914 (I think) Excelsior had on it.  The forks look like old springer forks and the frame was definitely reminiscent of a Black Phantom.  When the owner told me that Excelsior motorcycles were owned and manufactured by the Schwinn Family it made perfect sense to me.

Excelsior Motor Manufacturing & Supply Company was a U.S. motorcycle manufacturer operating in Chicago from 1907 to 1931.[1] It was purchased by Ignaz Schwinn, proprietor of bicycle manufacturer Arnold, Schwinn & Co. in 1912.[2] The Henderson Motorcycle Company became a division of Excelsior when Schwinn purchased Henderson in 1917.[1] By 1928, Excelsior was in third place in the U.S. motorcycle market behind Indian and Harley-Davidson. The Great Depressionconvinced Schwinn to order Excelsior’s operations to cease in September 1931.


I’m gonna go right ahead and file that under the “You learn something new every day” file. 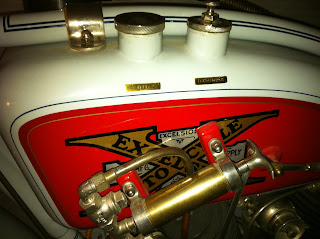 This moto has been meticulously restored and is one of only 15(ish) in it’s condition that are known to still exist.  He has already willed it to the Smithsonian when he dies.


Now if Joe Montgomery had taken a cue from Ignaz Schwinn on ceasing operations maybe he would still own Cannondale. 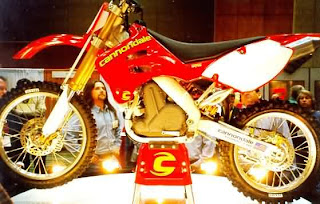 You can read about that HERE.  I still have some of the original sales materials from Cannondale about the Moto and  Quad.  Maybe someday someone will want them.  Maybe not.

If you are within Driving distance of Bucks County you should get your rear end to Cycle Bucks County this Saturday.  The courses are laid out utilizing some of my favorite roads in Bucks County, it benefits many great causes, AND if you see me I am giving out free high fives to anyone who ask’s.  At this time double high fives are limited to Eric and Jennifer with Jennifer getting a bonus hip bump as well.  Could you be so lucky as to get a double high five?  Come Saturday and find out.