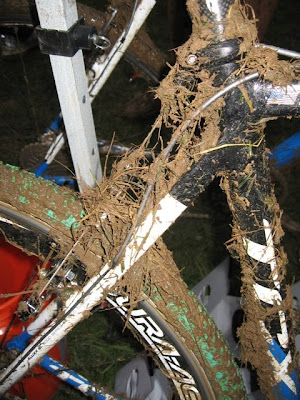 The UCI ended the ban on disc brakes late last week. Eldon asked if it was such a big deal over on Facebook. I left a rather long winded answer and it left me with more to say. I figured I would take the opportunity to ramble on about it here.

Spending time with people who actually race cyclocross one of the biggest complaints I have heard is the lack of braking power, or as many have put it any brakes at all. I remember when disc brakes were first introduced on mountain bikes. My new bike had V-brakes and I couldn’t imagine needing more power than they provided. I was wrong. The disc brakes provided constant power and amazing amounts of modulation. If you have progressed from the dark ages you would know this.

Eldon was stating that his brakes provided plenty of power and he didn’t feel the need to move over to disc brakes. Maybe in Oklahoma they don’t get the peanut butter consistency of mud that we get here in the Mid-Atlantic. (See the Picture at the top of this post) To get the full effect of what the mud can be like here check out this bike after half of a lap of the USGP race in Trenton from last year. 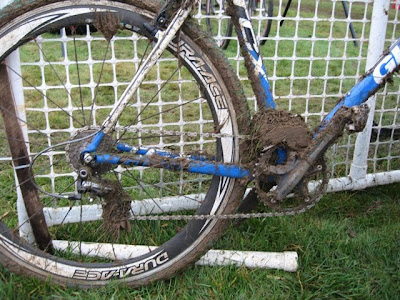 Yes that muck is from half of a lap.

Not only is it difficult to brake in the mud and wet conditions but the build up around the rim brakes makes it difficult for the wheel to spin freely. Disc brakes would eliminate this since there would be nothing on the fork and chainstay to get clogged up. The disc brakes would also allow riders to carry way more speed into turns and brake later, Moto Style.

Last year I worked a race in Long Gisland (that’s how they say it there) and the course was fast and completely mud free. The guys and gals in the pits had very little to do. I was even able to get them to perform for me. 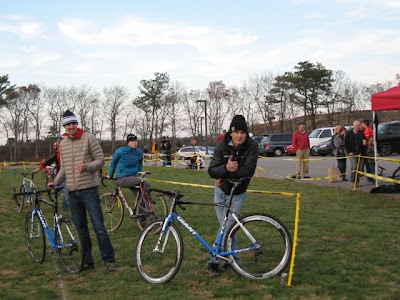 J-Fon and Justin are so happy!

Even though the race was being held under ideal situations Adam Craig (yes I’m name dropping) had to pit and get a new bike because during one of the dismounts he completely unhooked his rear brake and it didn’t work at all, not even as a drag brake. The crew(J-Fon and Justin) hopped into action gave him a bike for a half a lap and he was back out on his preferred bike (a TCX carbon prototype (just sayin)). Now this wasn’t the end of the world but it would not have happened if the bike had disc brakes. I also remember (More name dropping) Carl Decker and Kelli Emmett having scratches on their legs from dismounting and the brakes cutting them.

There will have to be some technological advancements for the disc brakes to be viable. Forks will need to be beefed up to eliminate chatter. The correct leverage ratio will need to be worked out to work with road levers (some of these exist already) and I am sure some one is already working overtime to integrate hydraulic mechanisms into road shift/brake levers. In my rambling opinion cable disc brakes are good but the true beauty and power from a disc brake comes in a hydraulic system. All of that crud shown in the second picture could still muss up the exposed section of a cable actuated disc.

The biggest deal to me is that the UCI is actually allowing progress and a choice. Just because they are allowing them doesn’t mean that anyone has to use them, but they will. This is like radio to me. There is plenty of stuff out there that I think is total crap. I choose not to listen to it. I don’t berate other people for listening to it, I’d just prefer to listen to other things. Some of the talk radio that I listen to people find offensive. When they complain to me I tell them to change the channel. So, if you want to use disc brakes then use them, if you don’t want to use disc brakes then don’t. Thank you UCI for the ability to choose and for the opportunity for technology to progress.