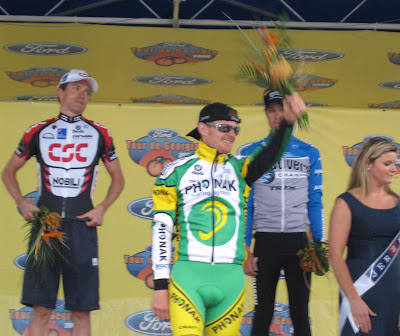 In totally unrelated news I found this gallery of “Sports Figures on Bicycles” in honor of Bike to Work Week on the home page of Sports Illustrated. Pretty cool pic’s. I like the one of Babe Ruth.

Now I am not going to chime in on all of the nonsense that is going around about the controversy because frankly I am already a bit sick of it. I do think the revelation that Floyd doped is best summed up by my friend Patty “It has been the elephant in the room for so long that I’m not sure anyone will really care. It’s kind of like Ricky Martin coming out. We don’t talk about it but the assumption is there.” Well said Patty.

Floyd has thrown his arms out like a drowning man and tried to pull many people down with him. Even though the media likes to focus on a certain Texan, the list is long and far reaching. The list includes Dave Zabriskie. I don’t personally know Dave Zabriskie but I admire his toughness on the bike, and his quirky sense of humor. His ads for DZ Nuts are hysterical.

He even had this one I found over at BikeRumor recently that made me chuckle a bit.

This got me thinking about a voyeuristic moment I had at the 2005 Tour de France. I had the good fortune to ride in a team car following a rider on the opening prologue. Its pretty cool to see a spectacle this large from behind the scenes. 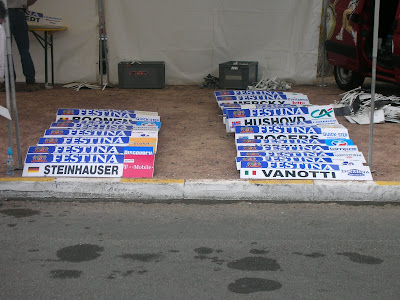 Pic by Gary Thornton
Magnetic nameplates placed on the front of cars.

That day Dave Zabriskie beat the odds and won the prologue beating a certain Texan who was the pre-race favorite. Of course by winning the prologue he also took the Yellow Jersey and was leading the race. What happens after that moment is a whirlwind of activity. The rider goes to doping control (How this topic got started) and interviews out the wazoo. It’s great to win the race but the riders post race routine is thrown out the window. They can not go back to the hotel, get a massage, Eat and play Canasta.

The hotel that I was staying in was also the same hotel as Team CSC. 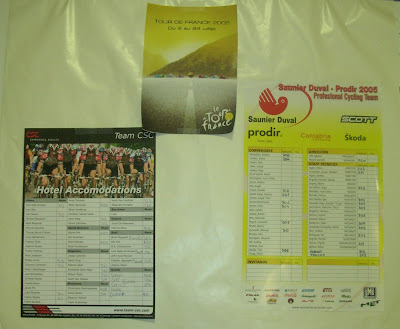 I was at the hotel and not getting massage or invited to any rousing games of Canasta so I mosied to the hotel bar to rehydrate from the day. As I was walking through the lobby I saw the CSC team car pulling up. It probably looked like this but with TT bikes on top. 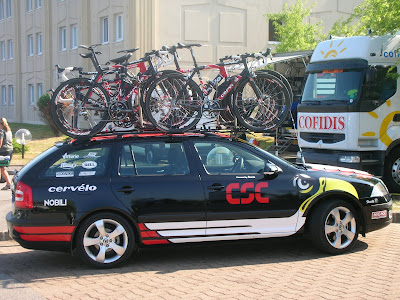 Bjarne and the team mechanic dropped Dave Z off and went to park the car. Dave got out of the car and walked up the steps slowly. He was still wearing his Yellow presentation jersey. Dave stopped at the top and looked out at his surroundings. It wasn’t a particularly scenic hotel with an airport across the street, and as much as Dave travels it probably would have looked like any other parking lot jammed with Team buses and support vehicles. 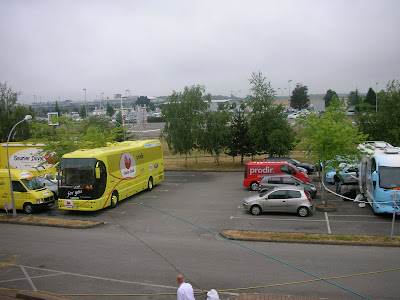 Pic by Gary Thornton
View to the left 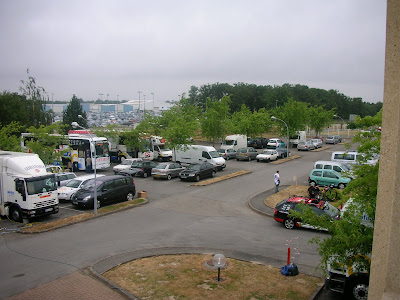 Pic by Gary Thornton
View to the Right. That may even be DZ’s TT bike on the CSC car

My mind painted a portrait of infinite possibilites going on inside of Dave’s head. I stayed inside and watched. He stood and surveyed the landscape for a good minute or more. Man, I wish I knew what was going on in his head. Dave is known for being quirky and a smart ass but I have to believe it was part HELL YEAH, part awe, and part validation.

Dave turned slowly and walked into the hotel. He looked content to me. I didnt want to ruin his moment in the least so I didnt say Hello, Good Job or anything. He worked hard for that. I didnt feel I should take it from him in any way. He deserved that moment and if he is like alot of professional cyclists he worked his entire life to be right there. I was frankly honored to witness it.

It was probably pretty cool to see this in the town square the next day after Stage 1. 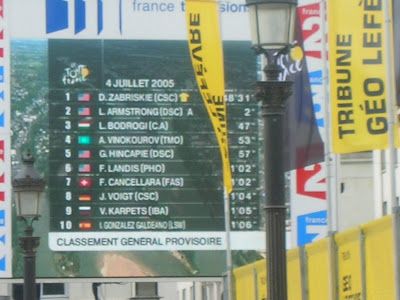 The picture at the top is from the Tour De Georgia in 2006. Floyd won that in his roll up to “winning” the Tour de France. I think in retrospect that the picture might be more appropriate if it looked like this. Floyd won the time trial and lept over Tom Danielson in the standings. DZ finished third. 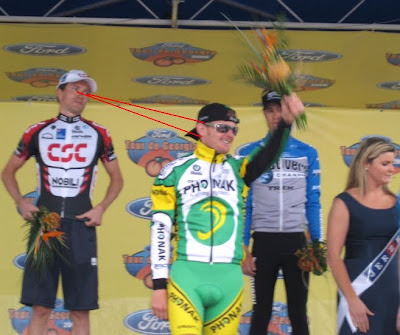 One of my favorite moments of that race was again provided by David Zabriskie. We were in the press conference beforehand and the organizers were previewing the race course and introducing the sponsors. Ford had stepped up and was the corporate sponsor for the race. Dave raised his hand to ask a question. I was sitting behind him and Johan Bruyneel. Johan started shaking his head and bowing it immediately. I couldnt help but think if DZ were still riding for Johan that Mr. Bruyneel would have snatched his hand straight out of the air.

It was a “You had to be there” moment but I laughed my butt off.

Here is the Toby Keith connection

Well I am exhausted from this retelling. I feel a bit like this guy. “This is one of my favorite pictures from the time trial.” 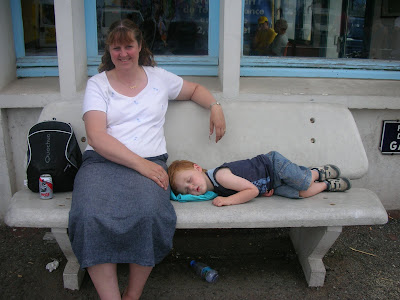 Nap up and get ready for the weekend. Have a good one, see ya on Monday.