Be kind to your Butt 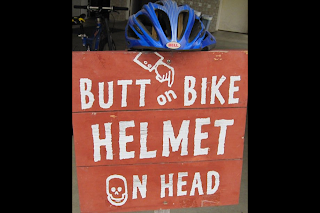 If you spend any time on a bicycle you know saddle choice is critical.  The wrong one can be excruciating and the right one can cradle your undercarriage just right.  Most people I know have their favorites.  I am no exception.  The Selle Italia Flite saddle is my saddle of choice.  I know I am not alone in this.

A few years ago I was devastated when they stopped producing them.  I tried the SLR and the “new” elite.  Meah…. not my cup of tea.  So I stocked up on a few that I could find and even Ebayed on once to get the white perforated one I always wanted that would match my bike so well.

Earlier I said I wasn’t alone in preferring the Flite.  I know this because a year or two ago they re-released it.  That is cool except for two thing’s.

1. I have a stockpile of Flite’s
2. They only bring Black into the US.

#2 isn’t such an issue because black goes with everything for the most part, and it doesn’t get dirty easily.  Problem being black can be boring. Gimme some color!  #1 is a bigger issue because I have good loved saddles.

I had heard about people recovering saddles.  I knew off the bat that I wasn’t going to do it myself.  There isn’t enough time in the day and I wasn’t into learning a skill half-assed that I wouldn’t likely use again.  So off to Google I went.  I quickly discovered RecoveredSaddle.com.  Taking a look around his site I was intrigued.  The work looked good and it looked like he had done quite a few Flites.

I fired an email off and asked a few questions, finished my beer and went to bed.  Upon waking up there were answer’s from Jason the Saddle Recoverer.  He answered all of my questions and requested some pictures of my saddles.  His going rate was $35 a saddle.  Way cheaper than a new Flite, and WAY more colorful.

I wanted to get my white perforated saddle recovered and a chunk fixed on the back where I had laid myself and my bike on the pavement at a good clip.  It also was wearing on the side from my thighs and the seat post. 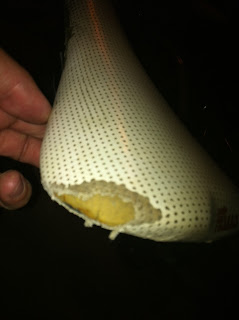 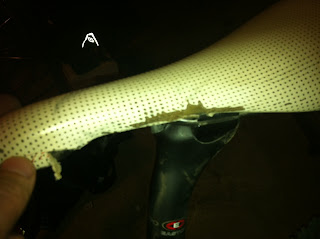 He told me that it would be an additional $5 to fix the tear at the back.

The other saddle was yellow and was looking tired and sad.  As an “admitted’ and not trying to recover Metrosexual the biggest issue with this one was it didn’t match any of my bicycles, and I don’t see going back to that shade of yellow anytime soon.

I decided to get one saddle done in white to match my mountain bike and one done in red to match my fixed gear.  Jason’s material of choice is a marine grade leather synthetic.  He assured me that it looks like leather but wears better and deals with the elements better.  This made sense since it is used to make boat seats.  He told me that he could use other materials but preferred this.  I had no reason to tell him how to do his job and didn’t want any Cipollini inspired animal prints so I took his recommendation.

Three weeks later he sent me an email.  “They are all stripped and getting glued up tonight”  That was music to my eyes.  (since I was reading it not hearing it).  The next day he started to tease me and sent me this.  Now I was excited.

In under a month I had my saddles back.   When the box arrived I anxiously tore into it.   He packaged the saddles up nicely. 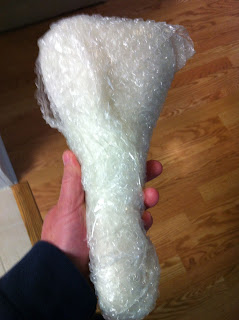 Then I started inspecting them.  The saddles looked as good in person as they did in his picture.  There was no photoshop trickery going on.  I happily texted the LRHG to let her know I got my saddles and gloat a little.  She stoked my ego a little and said “YAY!”.  It truly is the little things sometimes.

I can not find where the repair is on the rear of the saddle.  I looked on both thoroughly and that missing chunk is replaced.  I have no idea which saddle started its life as yellow, and which one was white with a tear. 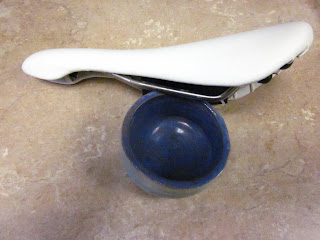 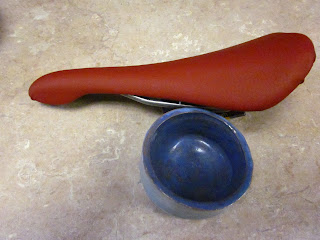 After the elation of having two spanking new looking saddles I started further inspection.    I flipped the saddles over and started checking the work.  Here is where I get a little critical.  Let me preface this critical eye with a few thing’s first.  If I was going to grade this overall transaction I would give it an A to an A-.  I will definitely use Jason again.
It can’t be easy to recover a saddle to look new.  The manufacturers all have specific equipment and tooling to achieve the job.  My guess is that they cover them and then install the rails.  Jason had to work around them.  I noticed a few small tears right where the rails are tightest to the shell.
Upon asking the question Jason explained is the hardest area to work on.  He has to use a popsicle stick to lay the material in there.  He apologized and made no excuses as to where the marks were or why.  I appreciate the straight forward answer.
The other small aesthetic issue on the saddles is the back.  The material bunches up a bit and you can see where it is trimmed.  It was definitely more noticeable on the red saddle than the white. 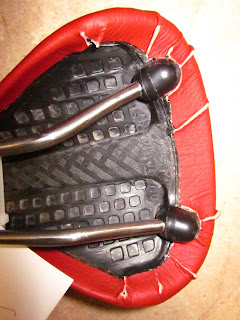 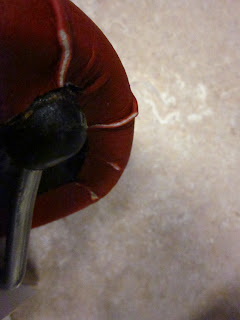 I am ok with this.  These saddles are “recovered” not brand spanking new.  Also I look at my saddles from the sides and the top, not from the bottom.
Do not take my observation as dis-satisfaction.  Jason did something I can’t and won’t do.  I have two great looking saddles for less than the price of one new one.  Plus these saddles are white and red, two colors I can’t easily get.
My bikes were very happy to be matchy.  They told me so. 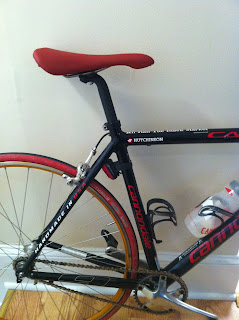 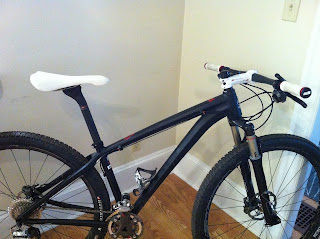 I whole heartedly recommend Jason at Recovered Saddle.  Add some color to your bike, and keep your undercarriage happy.