Being out on the road cyclists get to see quite a few road signs.  I put together an album of road signs over on Facebook and realized I have been taking sign pictures for quite awhile.  Got any good ones?  Send em my way.

I have been letting the good times of last weekend marinate for a full week.  Figured I should throw a few pics and a couple words on here to pay homage to the fine folks that put on the event.  That and engage in narcissistic behavior. 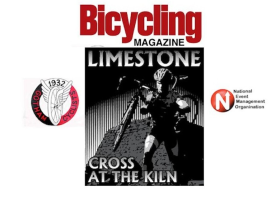 The Limestone cross in Emmaus was a genuine good time.  As Bike Beth said “went to a cross race and a snowball fight broke out. 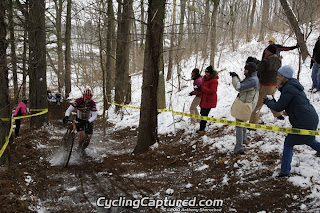 The course was snowy and they even plowed sections of the course.  For once the slow guys (me) went last not first.  It was good because I got to see how the fast guys do it.  The other side of that was by the time the 3/4’s went it was sloppy and slick.  The going was slow and treacherous.

I went into the race with a week worth of head cold and no competitive nature.  That was evident when in the first turn there was a massive pile up and instead of doing the sane thing and shouldering the bike and running around said pile up I waited.  I then proceeded to beat myself up about that the rest of the race.

People were slipping and sliding all over the place.  Twice I was passed in tricky sections by someone going way to fast for conditions only to go past them while they lay on the ground.

There was a steepish climb in the course with a dismount runup at the top.  This is where the crowd gather and the snowball fight started.  See pic above.  Bike Beth, the Fit Chick, Killer, Acura Matt, among others were pelting any and all people up the hill.  Some got more than others.  At one point I’m climbing and I hear “hey it’s Gary, get him”  and the volley of snowballs unleashed.  It made it fun, and it will be repaid in heckling throughout the season.

The kids were having fun and built the ultimate spectator. 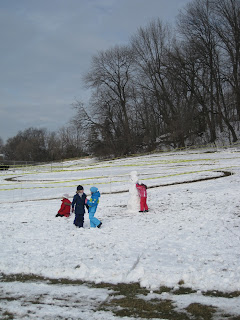 Apparently I had a problem with him at some point in the race. 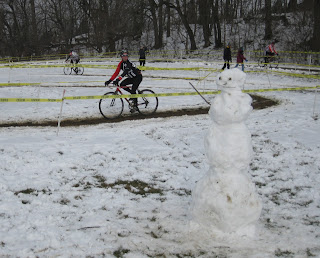 Not sure what he did to tick me off but an even closer look shows my anger towards him.

﻿ The kid’s weren’t limited to playing in the snow.  There was a Lil Belgians race. 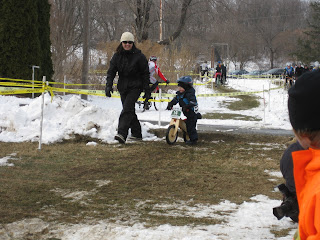 The one time he did get off the bike was to dismount and get over this barrier.  It was damn near at his waste and yes it was afreakindorable.   That was one of the most fun sections of the course for me and I rode it every time.  It was slightly faster but more importantly it was way more fun. 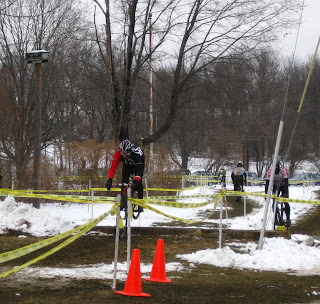 In my quest to be more multi-media the LRHG forwarded this over to me.  Now I just need to get my edit on and chop out the last 7 seconds of this 13 second clip.

The folks putting on the race did a great job getting the word out.  You can check out some fine pictures from Anthony Skorochod HERE. Also eyeball the local press HERE and HERE.

In a completely random and abrupt segue.  You heard it here first.  Francisco Ventoso is back on a Pro Tour team and back to his winning ways.   I quote myself  “Look for him at the front of the Pro Tour Sprints.  Homeboy is quick”

Francisco won the bunch sprint in stage 5 at the Tour Down Under. Well Done.  I look forward to seeing those arms in the air throughout the season.

There is a guy named Lance riding what he says to be his last Pro Tour race down there as well.  Sports Illustrated capitalized on this and came out with another story on Lance’s “alleged” doping.  This caused this guy to Video Blog (Vlog?) this.  Love Lance or hate Lance that is up to you.  I like what he did to raise the awareness of cycling in America.  But one thing I don’t think you can deny is that this is funny.

In more randomness from the Interwebs this clip is amazing on many levels.  Imagine a time not so long ago before frivolous lawsuits when we could ride our bikes barefoot, without helmets, doing wheelies down the street with our friends and family.

On that note I guess I cant avoid the dungeon (Basement) and torture (Rollers) any longer. 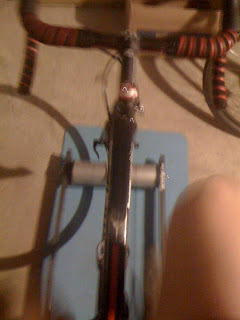